Zero tolerance for IS in Pakistan, says DG ISPR 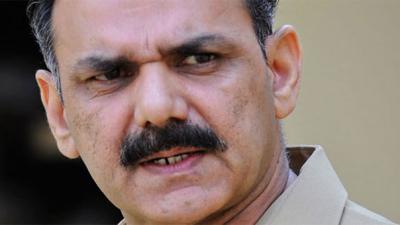 WASHINGTON: Pakistan has a zero tolerance for Islamic State militants – also known as ISIS, Daesh and ISIL – and the terrorist group has no acceptance in the country, said DG ISPR Lt Gen Asim Bajwa on Thursday.

The head of Pakistan Army’s media wing also said a global response was needed to deal with the global threat posed by the terrorist group.

Briefing reporters about the visit of Chief of Army Staff General Raheel Sharif to Washington, he said the Army Chief held discussions with top civilian and military leadership of the United States on issues ranging from defense and military cooperation to regional security and stability including the longstanding Kashmir dispute with India.

On the question of Daesh, Bajwa said that the group was a global threat and needed a global response to be defeated as also mentioned by the army chief.

“There is a zero tolerance for Daesh in Pakistan.

“Not even a shadow of Daesh will be allowed in Pakistan,” the DG ISPR said, adding that the Pakistani society has totally rejected it and there was no acceptance of the terror group in Pakistan.

Lt Gen Bajwa said that the whole world has recognised that Daesh was a threat but it was centered in the Middle East and has elements in Afghanistan.

He said the group tried to surface in Pakistan at a time when there was already a crackdown underway against terrorists and space for militants was squeezing.

“People are already fed up with terrorism and there is no acceptance for it in the society and they will be defeated in coming days,” he added.

All meetings were very positive and discussions were held in a very cordial atmosphere, DG ISPR said and added that the focus of the visit was on defense and military to military relations but discussions were also held in the larger context including economy and people to people contact.

“There is a clear regard and respect for Pakistan and for Pakistan’s armed forces and progress will be visible in all areas of discussion,” he said.

To a question the DG ISPR said that talks with the US Vice President, which continued for about two hours, covered Pakistan-US relations and the regional security and issues of stability.

“The biggest thing is that your perspective is being recognised and there is also an understanding and discussions were held based on that understanding.”

Discussions were also held with regard to India and the situation on the Eastern border and LoC and the longstanding Kashmir dispute.

He said that the US leadership has been told that the long term security and stability in the region required long term solution, which was the resolution of Kashmir dispute.

On Afghanistan, the DG ISPR said Pakistan supports the Afghan-owned and Afghan-led reconciliation process and recalled that the process had already begun with the Murree process when it was derailed.

The process had taken off and had it continued there would have been much progress made by now, he added.

The DG ISPR said there was an identification of detractors and spoilers but all the serious stakeholders feel the urgency and seriousness of the matter.

He said there was a clear realisation that the Afghan reconciliation process could not be delayed further and there was a seriousness and urgency in moving forward this process.

All stakeholders needed to support this reconciliation process, he added.

The DG ISPR said that US leaders paid glowing tributes to Pakistan and the armed forces and there was a clear recognition and acknowledgement of the opportunities created both inside and outside Pakistan because of the Zarb e Azb military operation.

To a question, he said that after the initiation of operation in North Waziristan many terrorist elements fled to Khyber Agency, which he added was an equally difficult terrain.

He said the operations achieved successes in Khyber also. Bajwa said many terrorists have taken shelter in Shawal Valley, a border region which was now being cleared.

Lt Gen Bajwa said no time frame can be given at this time for the military operation but the objectives will be achieved at the earliest, adding that in addition to Zarb-e-Azb there were some 12,000 intelligence based operations in cities against sleeper cells and abettors.

“The operation against terrorists will not end mid way and it will reach its logical conclusion,” he said.

To a question on Pakistan’s support in fighting the Daesh terrorist group, the DG ISPR said “we are already cooperating in the fight against terrorism in the region in a larger framework.”

He said best thing Pakistan could offer was the amount of experience and that the world was benefitting from Pakistan’s experience.

Bajwa went on to say that Pakistan has already played an important role in the global fight against terrorism and this will continue in the future.