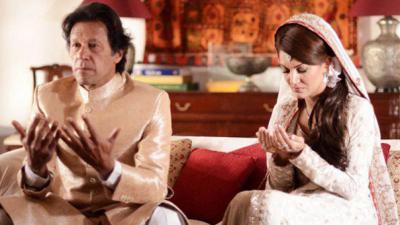 "We have decided on the divorce," Reham Khan, who is currently in London, told Geo News.

We have decided to part ways and file for divorce.

This is a painful time for me & Reham & our families. I would request everyone to respect our privacy.

I have the greatest respect for Reham's moral character & her passion to work for & help the underprivileged.

Reports & speculation about financial settlements are absolutely false and shameful.

Earlier announcing the divorce to the media, PTI spokesman Naeemul Haque said that the couple had mutually agreed to the divorce.

"Imran Khan has requested the media to refrain from speculation. It is a very serious and sensitive issue and a painful matter for the both of them. But I can confirm that they have both mutually agreed on the divorce," Naeemul Haque told Geo News.

But speaking to Geo News later from London, Reham said that the divorce had not yet been completed.

She said that the two had mutually agreed on the decision to file for divorce.

Reham Khan who is in London today will attend the International Media Conference where she is the keynote speaker and will also deliver a lecture on the state of media in Pakistan. The news was confirmed by organizer Mobeen Rasheed to Geo News correspondent Murtaza Ali Shah in London.


Rumors had been circulating for some time that the couple's marriage was falling apart – ten months after the two tied the knot in January this year.

"I am shocked at a TV channel making slanderous statement abt my marriage. I strongly urge the media to desist from such baseless statements," said the former cricketer-turned politician in a message sent to his 2.85 million followers on Twitter.

I am shocked at a tv channel making slanderous statement abt my marriage. I strongly urge the media to desist from such baseless statements

According to the report in September, which was aired on a TV channel and also published in a local newspaper, Reham was staying at Imran's Bani Gala residence even though she was not welcome there any longer.

The report, citing the editor of a local daily newspaper, claimed that Imran had recently returned from London where he had recently stayed with his children and Jemima, his ex-wife.

Jemima had tweeted photos of Imran and her sons posing together on her Instagram account during the PTI chairman's stay in London.

The relationship with Reham, already on the rocks, had worsened since Khan returned to Pakistan and differences between the couple may have reached point of no return, claimed the report.

Even before the denials by Imran Khan that his marriage was falling apart, the once Pakistan captain was seen rejecting reports published in a British newspaper alleging that ex-wife Jemima Goldsmith was trying to break up his new marriage with talk-show host Reham Khan.

British newspaper the Daily Mail had then quoted an unnamed cousin of Reham's accusing Jemima of being behind negative stories that had appeared in the media about Imran's current wife.

"We know what Jemima is doing. We know that she is behind this smear campaign. She doesn't want Imran's marriage to succeed because she is jealous," the Mail quoted Reham's cousin, who it said did not want to be named publicly.

Imran and billionaire Sir James Goldsmith's 41-year-old daughter divorced in 2004 after nine years of marriage.
The former Pakistan captain tied the knot with Reham in January this year after the same British newspaper reported that the two had already married secretly, a claim the couple had denied.

Last year on the 31st of December Imran Khan had denied rumours of his marriage to Reham Khan when he took to social media and termed the talk to be ‘greatly exaggerated.’

The reports of my marriage are greatly exaggerated!

Then the talk was denied by Khan’s sisters as well who told a foreign newspaper that the family had asked him about his marriage and he had denied it.

The cricketer turned politician denied media reports both local and international when the marriage was still only rumoured and denied the falling apart of his union in media reports. In the end in both instances the reportage proved to be true.