Fokker that caused martyrdom of Mushaf Ali Mir was faulty 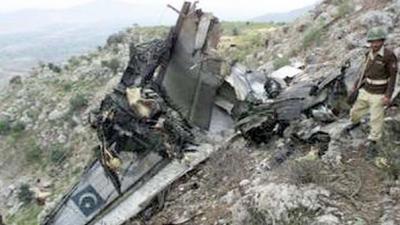 ISLAMABAD: Auditors on Monday informed the Public Accounts Committee that the aircraft that caused the martyrdom of then Air Chief Marshal Mushaf Ali Mir was faulty.

The Public Accounts Committee was informed that the aircraft in question was first tried to be inducted into the national carrier however the Pakistan International Airlines (PIA) refused to induct the aircraft. It was then tried to be handed over to the Navy which also refused to accept it.

The aircraft in question, a Fokker F-27 was inspected in 1993 and was declared unfit and dangerous. The aircraft was property of the Ministry of Defence Production according to the audit officials.

The DG purchases, was instructed to dispose of the aircraft but it was handed over to the Air Force in 1996 and was in the use of the Air Chief.

Air Chief Marshal Mushaf Ali Mir was martyred on the 20th of February 2003 when the Fokker F-27 he was onboard crashed near Kohat.

He was the 16th Chief of Air Staff of the PAF. He was promoted to the position on the 20th of November 2000 and served on the post until his martyrdom.

Initially the cause of the crash was determined to be pilot error and bad weather conditions.

The plane crashed killing the Air Chief, two staff officers among 15 others on board.