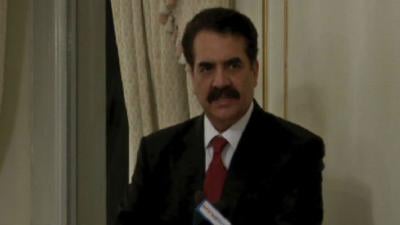 LONDON: Chief of Army Staff (COAS) General Raheel Sharif has stressed that Pakistan wants cordial relations with India but ruled out any bargain which puts at stake its respect and honour.

Addressing a dinner gathering hosted by H.E. Syed Ibne Abbas, Pakistan High Commissioner to the UK in honour of the COAS and his delegation at his official residence “Pakistan House” on 30 September 2015, the COAS said that Pakistan is passing through defining moments.

He said Operation Zarb-e-Azb had a great positive effect on Pakistan’s security situation and that it would continue until the country is rid of the menace of terrorism.

“Pakistan has a great future; we have given great sacrifices and it is time for Pakistan to move on, have peace and stability and make economic progress.”

Gen. Sharif also expressed his resolve to bring the displaced families of FATA back to their homes.

He termed the China-Pakistan Economic Corridor (CPEC) a game changer and said it would benefit not only Pakistan but the entire region.

Speaking about Pakistan-UK bilateral relations, the COAS said the two countries have historical relations and military to military linkages with each other were strengthening.

He thanked the British Pakistani community for their support in these testing times as well as showing an understanding of the challenges faced by Pakistan.

The High Commissioner, in his address, welcomed the COAS and his delegation at the dinner. He also appreciated the successful Operation Zarb-e-Azb under the leadership of Gen. Sharif.

“The courage with which the armed forces and the people of Pakistan are fighting this menace is unparalleled.”

H.E. Syed Ibne Abbas further said that under the leadership of Prime Minister Nawaz Sharif, Pakistan was moving ahead in all fields as a confident nation.

He said the PM Nawaz’s vision of a peaceful neighbourhood is the guiding principle of UK’s policy and that UK believes in strengthening ties through trade and investment.

“In this regard, CPEC was vital for the development and prosperity of the region,” he added.

He said UK is a close friend and development partner of Pakistan.

“This friendship is further strengthened by our vibrant diaspora.”

He added that frequent bilateral visits of the political and military leadership of the two countries provide further impetus to the existing relationships.