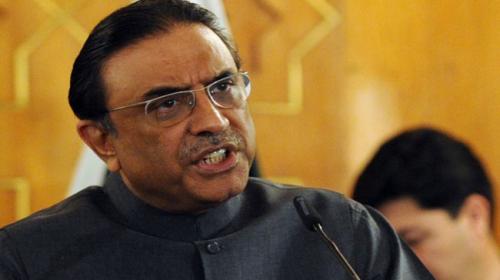 DUBAI: Pakistan People’s Party (PPP) Co-chairman, Asif Ali Zardari also came down hard on the Federation for rejecting the Sindh government’s summary in regard to the extension in Rangers powers.

“The federation violated the Constitutional supremacy by invading Sindh,” Asif Zardari said in a statement issued on Thursday on the eve of Quaid-e-Azam’s birth anniversary.

He called on the people to reject those who violate the Constitution.

The PPP Co-chairman further said that his party would continue to wage a fight against the elements which have been ‘destroying the country in the name of religion’.

He warned that in case the Constitution was continued to be violated this way, it would push the nation deep into the quagmire of instability.

Asif Zardari paid glowing tributes to the soldiers and policemen who have laid sacrifices of their lives in the war against terrorism.

He said the people must stay united in all circumstances.

On Tuesday, the Interior Ministry gave a free hand to the Sindh Rangers in Karachi to continue their policing job under the Anti Terrorism Act 1997 without having been influenced by the Sindh Assembly resolution or provincial government’s executive order.

In its letter issued to the provincial government following high-level consultations, the Interior Ministry conveyed to the Sindh government that the powers conferred to the Rangers under the Anti Terrorism Act 1997 could not be abridged, customised or made conditional.