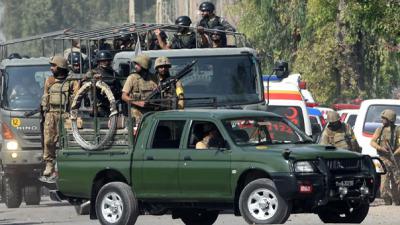 According to details the number of casualties was confirmed at 29, of which 15 were martyred in the mosque, 7 while performing ablution in the barracks next to the mosque, 3 including one officer embraced martyrdom while fighting the terrorists and 4 civilians employed at the base also met their maker.

"Terrorists entered the camp at 2 points and further split in into sub groups. The encounter began immediately due to quick response. The terrorists were contained within a close area. Meanwhile a group rushed to the mosque and martyred 15 Namazis offering prayers," said DG ISPR Maj-Gen Asim Bajwa in tweets.

He said that 13 terrorists were surrounded and killed by security forces. The attackers were clad in Frontier Constabulary (FC) uniforms, he said.

The DG ISPR added that Captain Isfandyar Bukhari embraced martyrdom while fighting valiantly and leading his troops from the front.

Update:Capt Asfandyar embraced shahadat while fighting valiantly and leading his troops from the front-10 pic.twitter.com/8QABikzDOZ

Security officials said the attackers split into multiple groups after entering the camp, with one group approaching the mosque and spraying worshipers with bullets as they prayed, killing 15 of them.

Earlier, Major General Bajwa said the terrorists tried to break deep into the base. Terrorists were engaged and contained around the guard room area, he added. The DG ISPR said the QRF reached and surrounded the facility and successfully isolated the terrorists.

PAF sources clarified that the base is not an operational one rather it is residential. They also added that all the assets are safe.

Pakistan Army commandos and personnel of the Pakistan Air Force and Quick Reaction Force (QRF) battled the attackers, killing all 13 of them.

Speaking to reporters earlier, KP Information Minister Information Mushtaq Ghani said that law enforcement personnel also responded immediately and reached the location as soon as they received information. The information minister said that the area was surrounded by tribal areas by all four sides and was vulnerable to terrorist attacks.

Major Haseeb of the Quick Reaction Force (QRF), who was shot in the thigh, and other soldiers who were injured in the exchange of fire with the attackers were evacuated to the Combined Military Hospital (CMH) in Peshawar.

Rescue officials said the remaining injured people had been taken to various hospitals for treatment.

The DG ISPR said the clearance operation was led by the Peshawar Brigade Commander with Quick Response Force, Army commandos, local PAF troops and police present outside the base in an outer cordon. The military spokesman later said that the Peshawar Corps Commander was also on the ground to oversee the operations.

The banned Tehreek-e-Taliban Pakistan (TTP) claimed responsibility for the attack.

Chief of Army Staff (COAS) General Raheel Sharif arrived in Peshawar hours after the attack to visit the Corps Headquarters and met with the injured soldiers from the Army and the PAF who were being treated at the Combined Military Hospital.

The Army and PAF chiefs later also visited the camp and met PAF, Army, police personnel who defeated the attackers and killed all the terrorists, the DG ISPR said.

Prime Minister arrives in Peshawar to attend funeral of martyrs

Prime Minister Nawaz Sharif arrived in Peshawar to attend the funeral prayers of those martyred in the terrorist attack. The prime minister will also visit the soldiers and civilians wounded in the attack, said a spokesman for the PM House.

Earlier, the prime minister condemned the attack in a statement. A PM House spokesman said the prime minister was personally monitoring the operation against terrorists. PAF chief Air Marshal Sohail Aman spoke to PM Sharif over telephone and informed him in detail about the details of the ongoing operation.

Interior Minister Chaudhry Nisar Ali Khan praised personnel of the security forces for thwarting the terrorist attack and vowed that the war against terrorism would continue until its logical end.