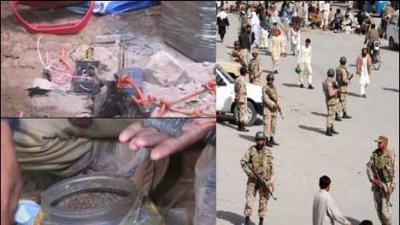 QUETTA: Law enforcement agencies have foiled a major terror bid by arresting terrorists in the provincial capital a day before Defence Day celebrations.

The Inter-Service Public Relations (ISPR) on Saturday said a terrorist belonging to the Indian intelligence agency has been arrested on the basis of intelligence information.

The ISPR said an IED with four kilogram explosive material and mortar shells were also recovered from the possession of the terrorist who has also confessed to his involvement in two blasts in as many locations in the past that resulted in many deaths.

It said an IED which was already planted by the terrorist was also defused during the operation. Moreover, SSP Operations Quetta Wahid Khattak told media that a terrorist was arrested while he was planting a bomb under the Saryab bridge.

He said the Bomb Disposal Squad was called in to defuse the bomb that weighed six kilogram.

Rain expected in several parts of Pakistan in next 4-5 days, says Met dept