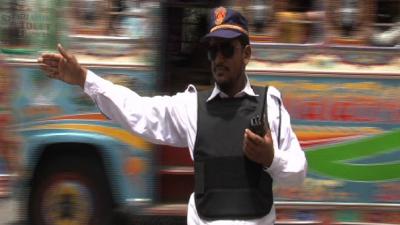 KARACHI: The Traffic police suspended operations in eight areas of the metropolis after they were declared sensitive for them on Thursday.

Following the above development, the traffic police personnel will remain inside their check posts in areas including Manghopir, Pirabad, Orangi Town, Moach Goth, Saeedabad, Baldia Town, Korangi and New Karachi, said a spokesman for Traffic police.

It is pertinent to mention here that two traffic constables were shot dead at Gul Bai last night and as many at Sunday Market near NIPA Chowrangi on August 30.

The investigators found 10 empties of 9mm pistol from the site of last night’s attack on traffic constables in Gul Bai area and sent them to a lab for a forensic test.

According to initial investigation report, two armed assailants, aged between 20 and 30 years, riding a motor cycle opened fire on the traffic constables. They were clad in pants and shirts.

Police said the last night’s attack appears to be similar to an incident of attack on traffic constables at University Road a few days back. The attackers’ appearance in both the incidents was also similar.

Ten traffic police personnel were on duty at the location of last night’s attack and two of them also carried Kalashnikovs but due to lack of training they could not operate them for their defence.

The report also said that sketches of the suspects are being prepared with the help of the eyewitnesses.