Imran says ECP may file reference against him 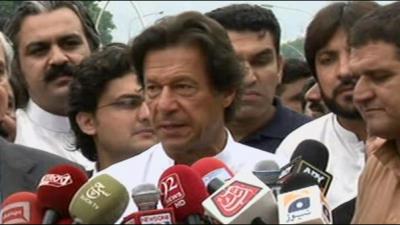 ISLAMABAD: Pakistan Tehreek-e-Insaf (PTI) Chairman Imran Khan on Friday night said he welcomes the reports that the Election Commission of Pakistan (ECP) may file a reference against him.

In a message posted on twitter, he said that move on part of the electoral body would provide him with an opportunity to present more evidence that the ECP was in cahoots with the Pakistan Muslim League-Nawaz (PML-N) in the 2013 General Election.

I welcome the news ECP may file reference against me bec then we can present more evidence we have of PMLN-ECP collusion in GE 2013 rigging.

Imran Khan has strongly criticized the Election Commission after the recent election tribunal decisions that turned out to be in favour of the PTI.

He had demanded resignations of all four provincial members of the electoral body after re-polling was ordered in NA-122, NA-125 and NA-154 constituencies.