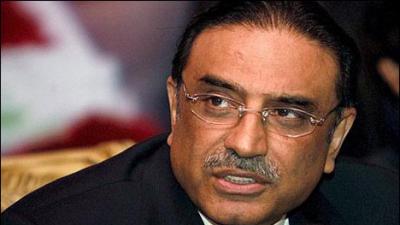 ISLAMABAD/KARACHI: Former president of Pakistan and Pakistan People’s Party (PPP) Co-Chairman Asif Ali Zardari on Thursday directed to launch a strong protest and adopt a solid strategy against arrests of the party leaders.

Expressing annoyance on NAB and FIA actions in Sindh, the PPP co-chairman reportedly said that his party was being pushed against the wall. “Is corruption prevalent in Karachi only?” he was quoted as posing the question.

The development was followed by a statement from Opposition Leader in the National Assembly, Syed Khursheed Shah, in which the PPP leader warned of waging a war if his party’s co-chairman was targeted by the federal institutions.

Speaking to media representatives in Islamabad, he said that a decision should be made whether to keep Pakistan intact or to destabilize it.

“Any action on Asif Ali Zardari will instigate a war,” said Shah.

The opposition leader further said former prime minister Raja Pervez Ashraf was being implicated in a case regarding ‘grey trafficking’.

Reaching out to ruling PML-N, Shah said the government must realize that political parties were their aides and nothing can be achieved by force.

“We are strangled in mutual chaos...People’s Party doesn’t want to weaken the Parliament,” he added.

Shah vowed to fight against oppression by remaining in the Parliament. He said that the Parliament should be used as a forum to resolve the matter of Election Commission members.

PTI Chairman Imran Khan has demanded resignations of all four provincial members of the ECP following election tribunals’ verdicts in favour of his party candidates in NA-125, NA-122 and NA-154.

“ECP members should leave themselves as they are still holding on to their posts due to monetary benefits,” Shah added.

The leader of the opposition said that they were ready to hold dialogue with Prime Minister Nawaz Sharif.

In an apparent reference to Sindh, he said that a particular province was being targeted and shattered on purpose. “Has corruption been eliminated from Punjab, Balochistan and Khyber Pakhtunkhwa,” he questioned.

The PPP stalwart went on to say that the Indian spy agency, Research and Analysis Wing (RAW) had made its way into Balochistan.

Army Chief Gen Raheel Sharif should have invited the Chief Minister and the Governor in the recently held meeting over Karachi law and order, he concluded.

The former federal minister, who is also a close aide of Zardari, was picked up from his office the previous day and taken to an undisclosed location for questioning. He was later transferred into the custody of Rangers personnel, who presented him in the ATC today under strict security.