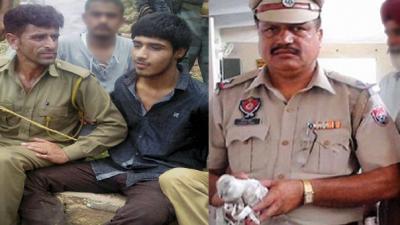 For India it seems bashing Pakistan isn’t just kosher, it fans the flame of loyalty to burn brighter and stronger. Under such circumstances, it is not surprising that Pakistan is blamed for sending spy-pigeons, mentally unstable spies and plotting conspiracies against its neighbour by the media.

The most recent allegation comes after the arrest of a man they claim attacked an Indian Border Security Force (BSF) convoy. The claim is one we have heard before, this time however it isn’t a pigeon but a deranged man identified as Usman Khan aka Qasim aka Navaid who claims he travelled for 12 days through the jungle with an accomplice and had been in India for two days to do ‘Gods work’.

While Pakistan’s National Database and Registration Authority (NADRA) dismissed Indian allegations stating on Thursday that Usman Khan is not Pakistani, the mainstream Indian media – excited like a child learning how to whistle – continues to blow hard drawing parallels between Usman Khan and Ajmal Kasab hoping to create the same piercing noise associated with a clean-whistle.

Towing the same line mainstream journalists have chosen, one Indian journalist pointed out reasons why Khan is most likely mentally unstable; but even in trying to prove his argument (that all is not well upstairs with Khan) the journalist still maintained the argument that Khan is a terrorist.

The Indian Express also tows the same line but does mention the conflicting claims the deranged-Khan has made. Khan allegedly told his captors he arrived with one accomplice 12 days ago but to the police he said he arrived in the first week of June.

Another Indian Express story plays on Pakistani media’s silence on the issue; pointing towards the backlash media outlets faced when they identified Kasab as Pakistani. It quotes a retired Pakistani Brigadier terming the accusations impossible because of heavy military presence on the Indian side of the border, terming the allegations an excuse to discontinue peace talks.

It is a sad day for those hoping for better India-Pakistan relations; when Pakistani Bajrangi Bhaijaans are standing up to help Geeta find her home, Indian media and even politicians are keen to jam the cog-wheels of anything that may warm hearts and pave the path for peace.

For those carrying the batons and those holding torches along the path, the Indian media is proving to be a storm determined to blow out the flames and disorient the relay runner.

It is not difficult to understand why the Indian media overdoses itself at times like this; it brings in ratings that otherwise require a lot of legwork. For the men and women in the Indian media getting ahead of themselves becomes excusable when cashing in on a story like Khan’s.

However, when the Home Minister of India tells the parliament that Navaid aka Usman aka Qasim – a man who should surely be undergoing mental-evaluation – is a Pakistani terrorist who hails from Faisalabad, one can only wonder if over the course of the next few weeks we will see another video on social media of another Indian official accidentally exposing to the world the reality of the two alleged Pakistani terrorists that felled armed BSF soldiers and injured nearly a dozen more.

Whether his name is Khan and he is a terrorist, or not, time will tell. Until then all those real life Bajrangi Bhaijaans who were trying to get Geeta home, please sit down your moment has come and passed.


The views expressed in this blog do not necessarily reflect the views of the Jang Group and Geo News.