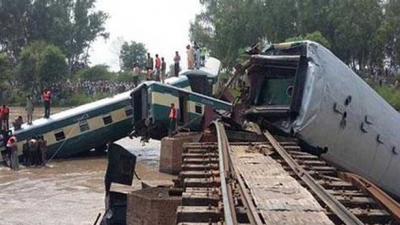 ISLAMABAD: The report of the joint inquiry committee has found that the Gujranwala train accident was a result of over speeding.

According to the findings of the committee, Over speeding led to the train being derailed and the emergency brake was used late.

The report places the blame of the accident on train driver Riaz Ahmed, Muhammad Fiaz and guard Shahid Mahmood.

The report was prepared by members from the Railways and Pakistan Army who were part of the inquiry team formed to probe the accident.

At least 19 people including 14 personnel of the Pakistan Army were killed earlier this month when the train fell into a canal after the partial collapse of a bridge.