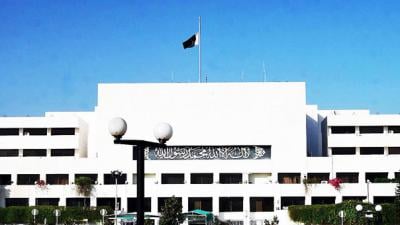 ISLAMABAD: Both the Upper and Lower Houses of Parliament unanimously passed resolutions on Thursday condemning recent anti-Pakistan statements made by the Indian leadership.

A resolution was tabled in the National Assembly by Finance Minister Ishaq Dar which was passed unanimously by all members of the House.

Speaking on the floor of the assembly, Dar said that Indian Prime Minister Narendra Modi had openly accepted India’s role in breaking Pakistan in the 1971 war. He urged the United Nations to take notice of the Indian leadership’s hateful statements.

He said that Pakistan is continuously working to establish peace in the region, but foreign hands are involved in terrorism and suicide bombings in Pakistan to sow instability in the country.

The Indian prime minister’s statement of admission had made this clear, he added.

Earlier today, the Senate of Pakistan also unanimously approved a resolution against statements made by the Indian leadership.

The Senate resolution was tabled by the Leader of the House, Senator Raja Zafar ul Haq. The resolution likened Modi’s statements to an attack on Pakistan. It reiterated that the Pakistan Army is fighting a war against terrorism and is fully prepared to respond to any form of aggression.

The response comes in light of the Indian premier’s speech during his recent visit of Bangladesh, where he admitted that India played a role in breaking up Pakistan in the 1971 war.

In his speech and later on social media, Modi declared that the creation of Bangladesh was an Indian dream. He admitted that the Indian armed forces fought alongside the Bengali Mutki Bahini (Liberation Army) and helped fulfill ‘the dream’ of breaking up Pakistan.