Do not mistake Pakistan for Myanmar, Nisar warns India 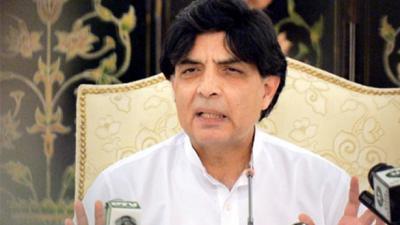 ISLAMABAD: Interior Minister Chaudhry Nisar said on Wednesday that India should not mistake Pakistan for Myanmar.

The minister’s statement was in response to Indian Minister of State for Information Rajyavardhan Singh Rathore who hours after his country had carried out an operation against militants in Myanmar had said India will strike at a place and at a time of their choosing against all countries, including Pakistan, and groups harbouring “terror intent”.

Nisar emphasised that those who harboured bad intentions towards Pakistan should open their eyes and ears.

“Pakistan Army is fully capable of responding to any adventurism,” said Nisar.