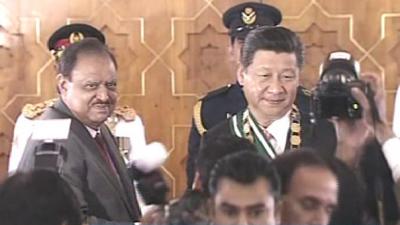 ISLAMABAD: Visiting Chinese President Xi Jinping was conferred with Pakistan's highest civilian award, the Nishan-e-Pakistan, at a special ceremony at the President House in Islamabad on Tuesday.

Jinping was welcomed to the Presidency by President Mamnoon Hussain and his wife. Several dignitaries, including chief ministers, governors, service chiefs, diplomats and other important personalities were attended the ceremony.

The award followed the Chinese president's address to a joint sitting of Parliament called in honour of the visiting dignitary, where Jinping hailed the longstanding Pakistan-China relationship and called the neighbouring country its ‘Iron Brother’.

Jinping's address was the first address by any Chinese president to a joint sitting of Pakistan's Parliament.

The visit has been seen as historic, with the Chinese president unveiling the key $45 billion China-Pakistan Economic Corridor (CPEC) project, which aims to create direct links between China and the Arabian Sea, bring growth to the restive western Chinese region of Xinjiang, and boost the Pakistani economy and transform the country into a regional economic hub.

'Sold for Rs5,000': Sargodha woman says husband gave her away to friends who raped her for 21 days