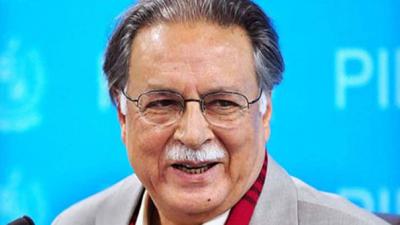 ISLAMABAD: Criticising the Pakistan Tehreek-e-Insaf (PTI) chairman, Information Minister Senator Pervez Rashid on Wednesday said that Imran Khan would address the same assembly that he has been calling ‘fake’.

Rashid was reacting to the PTI chairman's announcement that he would address the joint session of Parliament on Friday to present his party's policy on Pakistan's role in the Yemen conflict.

The information minister claimed that it had become a constant habit of the PTI to engage in ‘undemocratic politics’.

He claimed that Khan wanted to influence the judicial commission, which is being formed to probe electoral irregularities in the 2013 general elections alleged by the PTI.

He said that the nation has become fed up of the PTI chairman's baseless accusations.

Rashid claimed that corruption was rampant in Khyber Pakhtunkhwa and that Khan should shift his focus to the province where the PTI leads the provincial government.