Two Navy ships leaving to Yemen to get Pakistanis: Aizaz 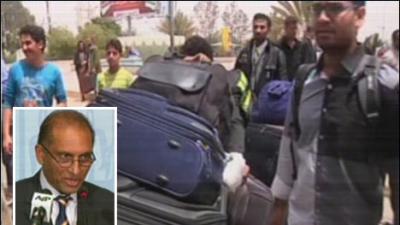 ISLAMABAD: Pakistan Foreign Secretary, Aizaz Ahmed Chaudhry Saturday said Pakistan Navy is all set to send two ships to evacuate Pakistani citizens stranded in Yemen in the aftermath of the ongoing fight there.

Addressing a press conference, he said the first ship will leave on Sunday while the second will set sail on Monday. Each ship has a capacity to board 200 people, he added.

He said Pakistan Ambassador in Yemen, Dr Irfan has informed that a caravan of 600 Pakistani citizens is headed towards Al-Hadida and hoped that they will get there in the next 3-4 hours.

The foreign secretary said Pakistan is also in contact with Saudi authorities to ensure safe passage for the ships.

He said Pakistan is waiting for the fight to end in Aden so that its citizens trapped in the city could be evacuated.