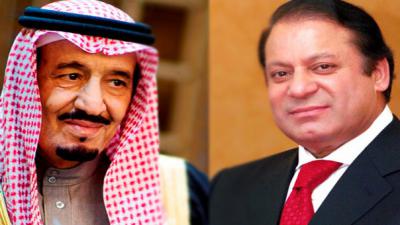 RIYADH: Prime Minister Nawaz Sharif has expressed full support for Saudia Arabia in the ongoing operation Determination Storm in Yemen, stressing that all potentials of the Pakistani army are offered to the Kingdom of Saudi Arabia, said Saudi Press Agency (SPA).

According to SPA, the two leaders, during a telephonic conversation, also reviewed the bilateral relations between the two countries.

“The Saudi Arabian King thanked PM Nawaz Sharif for the support, stressing the depth of relations between the two countries,” said SPA.

Also Read: Pakistan contacts neighbouring countries of Yemen for evacuation of citizens
It may be noted here that PM Nawaz while chairing a high-level meeting discussed recent developments in the Middle East and examined the Saudi Arabia's request to join the Gulf-led operation against Houthi rebels in Yemen.

According to a statement issued by PM House two days ago, the Premier had said that any threat to Saudi Arabia's integrity would evoke a strong response from Pakistan.

Special Foreign Adviser to PM, Sartaj Aziz had also confirmed that top Saudi officials had requested Pakistan to join the operation against Yemeni rebels but no decision in this regard has yet been taken.

In protest against #CannoliOwners, Urdu poetry recital to be held in Islamabad