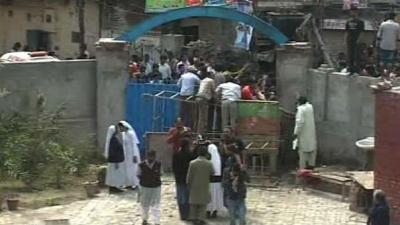 LAHORE: Twin blasts targeted the Roman Catholic Church and Christ Church during Sunday mass in Youhanabad area of the provincial capital, killing 15 people including two policemen and injuring at least 70 others.

According to initial reports, two suicide bombers attacked the churches located in the Christian locality.

Eye witnesses told Geo News that a man blew himself up outside one of the churches as a police guard stopped him from entering, while the other blast took place inside the church during Sunday mass.

However, police have yet to confirm the nature of the blast. Two suspected men were caught from the venue but the enraged mob burnt them alive after subjecting them to severe torture in the presence of police.

The explosions caused a stampede at the Church as panicked worshipers ran to save their lives. Windowpanes of the nearby buildings were shattered due to the explosions.

Forensic experts are gathering evidence from the blast scene. The dead and injured were taken to Lahore's General Hospital. MS General Hospital confirmed that 15 people lost their lives.

The hospital has made an appeal for blood donation. Prime Minister Nawaz Sharif and Interior Minister Chaudhry Nisar Ali Khan condemned the attack and have sought a report into the incident.

Sadiq Daniel, Bishop of Pakistan, condemned the blasts and termed them an attack on Pakistan. He said that all the missionary schools will remain closed on Monday against the attack.

A large number of people from Christian community took to the streets in Karachi in protest against the Lahore blasts.

Chief Minister Punjab, Shahbaz Sharif announced Rs500,000 each for the family members of the deceased and Rs75,000 for each the injured.