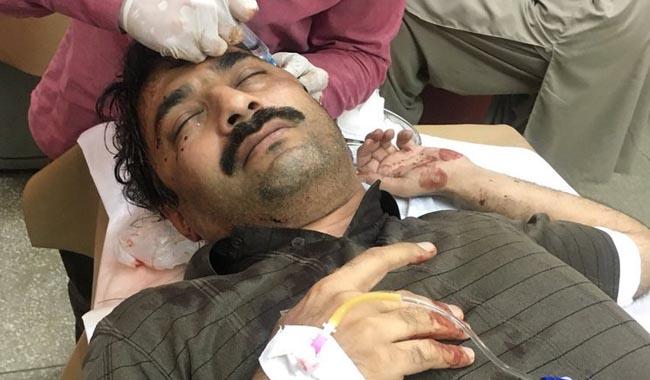 ISLAMABAD: Senior reporter Ahmed Noorani was attacked by unknown men in the federal capital in the broad day light on Friday.

Noorani, who is associated with The News, was chased by motorcyclists from Rawalpindi as he traveled towards Islamabad.

Ahmed Noorani was travelling in his car along with his driver when he was intercepted near Zero-Point by six men.

The attackers pulled out the ignition key before dragging him out of the vehicle and beating him up. The driver was also subjected to torture.

Ahmad Noorani is beaten & wounded with head injuries. Taken to hospital. Intercepted and attacked near O-Point Urdu Un Isloo a while ago.

According to details, police have registered a case against unknown persons who attacked the journalist.

Commenting on the FIR, noted anchorperson Hamid Mir said the incident has create a sense of fear among the journalists all over the country and the police has only included sections of attempting to murder.

Talking to Geo News, Mir also said that this is a test case for Interior Minister Ahsan Iqbal.

Later, on orders of Prime Minister Shahid Khaqan Abbasi, the interior ministry constituted a probe committee to investigate the matter. The committee, comprising Chief Commissioner and IG Islamabad, will report back in three days.

Former prime minister Nawaz Sharif telephoned the prime minister and directed him to probe the incident. ‘The government should investigate the attack on the journalist and bring the perpetrators to the book,’ he said.

Pakistan Peoples’ Party Chairman, Bilawal Bhutto also met Ahmad Noorani and condemned the attack on him. Talking to reporters, Bilawal demanded inquiry and asked that culprits must be held accountable.

The attack on the reporter was condemned by the journalists and senior politicians from all the major political parties.

May Allah bless him with complete recovery. This is heartbreaking. https://t.co/xz2H5QVfdI

Condemn the attack on ahmed noorani. An attack on journalists is an attack on freedom of expression. Culprits must be identified & punished

Strongly condemn violence against journalists and the attack on Ahmed Noorani.