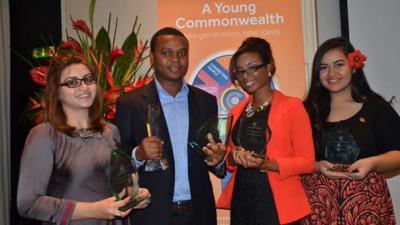 Gulalai Ismail, a 28-year-old Pakistani human rights activist from Peshawar, has been awarded the 2015 Commonwealth Youth Award for Excellence in Development Work.

Gulalai was chosen as the winner from the Asia region out of a shortlist of sixteen extraordinary young people from across the Commonwealth.

The award recognises outstanding young people under 30 whose development projects and programmes have had significant impact on their communities, countries and across the globe.

Speaking to Geo News, Gulalai said the fact that she had been given the award meant the voices of Pakistani and South Asian girls working for their rights was being recognised.

“The world accepts that young girls should be aware of their rights and believes that they should work to bring change within their societies,” she said.


At the age of 16, the young Pakistani activist established Aware Girls – an empowering, women-led organisation in northwestern Pakistan to educate girls about their human rights.

Gulalai, who led a team of 100 female election monitors in 2013 and tackled issues such as domestic abuse and early marriages, established more than 200 discussion clubs to provide girls with the education and skills to protect themselves from contracting HIV and Aids.

In 2014 she received the International Humanist Award and is one of Foreign Policy Magazine’s 2013 ‘Global Thinkers’.