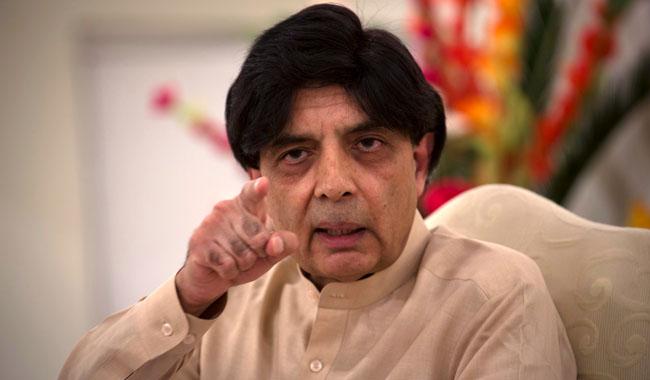 Senator Pervaiz Rashid, who lost his job over the Dawn Leaks controversy, invited ire of his former cabinet colleague on Friday by commenting that decisions were taken against the government in the presence of their own Interior Minister, without naming Nisar Ali Khan.

While talking to a news channel, the former information minister blamed what he said a ghost of former military dictator Pervaiz Musharraf for Nawaz’s ouster.

This is not the first occasion when Nisar has reacted strongly to party policy. Last week, he expressed anger during PML-N’s Central Executive Committee meeting over announcement of Sardar Yaqoob Khan Nasar as interim president prior to the meeting.

He also refused to accept cabinet slot under Prime Minister Shahid Khaqan Abbasi amid differences with leadership over the handling of Panama Case that led to the disqualification of Nawaz Sharif.

Hitting back at Pervaiz Rashid, a spokesman for Ch Nisar said such people were obsessed with the Interior Ministry and passing the buck to the interior ministry and the establishment for their own failures.

“Such people should have explained what help they were expecting from the ministry,” said the spokesman.

He said the six-member committee that decided the Dawn leaks issue comprised one member of the Interior Ministry while five of them were either under federal or provincial governments.

“If they are so innocent, they should advise the government to make the Dawn leaks report public,” the spokesman added.

Without naming Pervaiz Rashid, the spokesman said in a statement: “They should have displayed courage to openly explain about conspiracy instead of talking in riddles”.