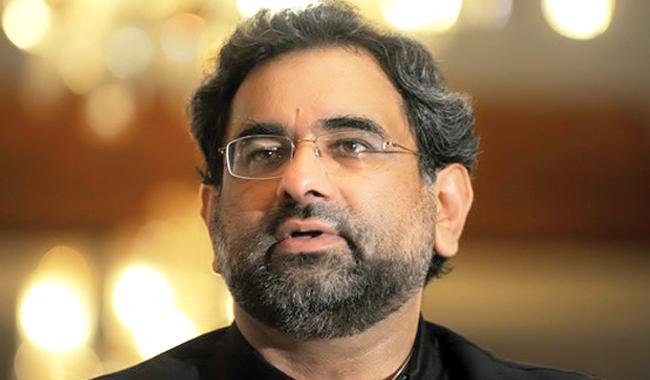 ISLAMABAD: Shahid Khaqan Abbasi has taken oath as the 18th prime minister of Pakistan at the President House Islamabad here on Tuesday.

President Mamnoon Hussain administered oath to Abbasi, after he swept the election with a majority vote.

MQM-P, the fourth largest political party in the parliament, which has 24 members also announced to back PML-N’s candidate for the slot.

Abbasi criticized the Supreme Court of Pakistan's verdict that disqualified Nawaz Sharif last week shortly after being elected prime minister of the country.

"I am with Nawaz Sharif for 30 years, he never asked me to indulge in corruption. Nawaz Sharif's fault is that he made Pakistan a nuclear power," he said.

Those of levelled allegations [against Nawaz Sharif] have ended up securing only 33 votes," he said referring to Pakistan Tehreek-e-Insaf candidate Sheikh Rashid Ahmed.

"There would be another Supreme Court where there would be no JIT, and where we will depose that Nawaz Sharif never indulged in corruption," he said.

The PML-N leadership and its parliamentary party had nominated Khaqan Abbasi as an interim Leader of the House in the National Assembly and Shahbaz Sharif as the permanent prime minister who would succeed Abbasi during the second half of the next month in case he wins the by-poll on NA-120 constituency seat vacated by Nawaz Sharif.

NA Speaker Sardar Ayaz Sadiq on Monday accepted nomination papers of Khaqan Abbasi and five other candidates from the opposition parties that failed to agree on a consensus candidate.

The opposition parliamentarians who filed their nomination papers which were accepted by the speaker include Leader of the Opposition Syed Khursheed Shah and Syed Naveed Qamar of Pakistan People’s Party (PPP), Sheikh Rashid Ahmad who is joint candidate of Pakistan Tehreek-e-Insaf (PTI) and Awami Muslim League, Sahibzada Tariqullah from Jamaat-e-Islami (JI) and Kishwar Zahra from Muttahida Qaumi Movement (MQM).

CM Punjab told 670,000 may be infected with coronavirus in Lahore