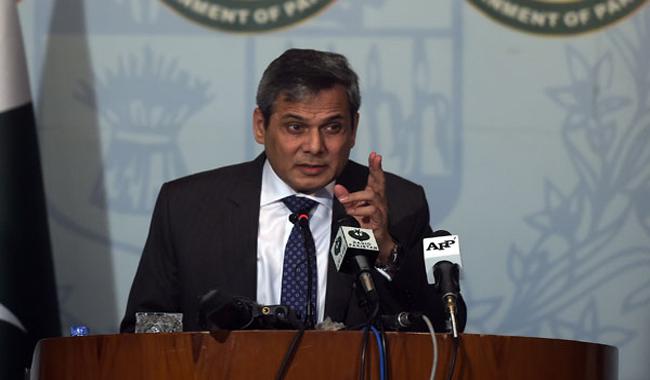 Addressing a weekly media briefing here Thursday, Zakaria said the Muslim Ummah is worried about the human rights violations by Indian troops in occupied Kashmir. The secretary general of the Organisation of Islamic Cooperation has also denounced atrocities in IoK.

Earlier this week, Iranian Supreme Leader called upon the Judiciary of his country to pursue issues like occupied Kashmir legally and adopt official position on such international issues.

Ayatollah Khamenei made these remarks at a meeting with high ranking members of Iran’s judiciary including Chief Justice, Sadeq Amoli Larijani.

The spokesman also termed the recent inclusion of Hizbul Mujahideen chief Syed Salahuddin in the Global Terrorist Watchlist by the US government as 'unjustified'.

He emphatically stated that there is no organized presence of any terror outfit including TTP, Jamaat-ul Ahrar, Daesh and Al-Qaeda on Pakistani land.

He claimed that as result of effective counter terrorism operations the remaining Taliban have escaped to Afghanistan, adding that the ‘Haqqani Network’ operates out of Afghanistan, not Pakistan and that many leaders of the group have been killed in Afghanistan.

He said the allegations about presence of Haqqani network in tribal areas are mere rhetoric.