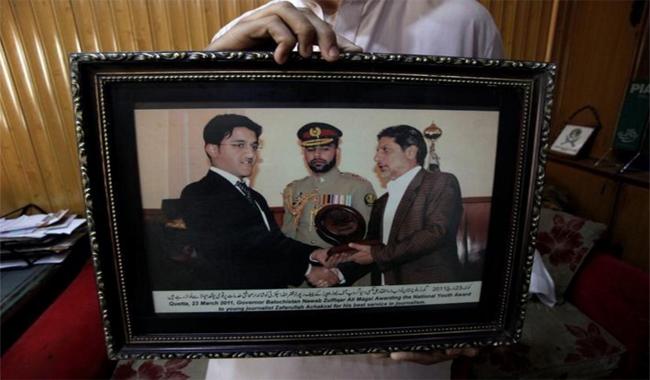 QUETTA: Authorities have arrested a journalist under a new electronic crime law aimed at combating terrorism and preventing blasphemy but which critics say is used to suppress political dissent.

The journalist, Zafarullah Achakzai a reporter, in Quetta city was produced before a magistrate on Wednesday and remanded in police custody under the cyber law, an official from the police's Federal Investigation Agency (FIA) said.

He is one of the first reporters to be charged under the electronic crime law, which was introduced in August to the objections of media freedom and human rights activists.

Achakzai's father, Naimatullah Achakzai, said his son was detained on Sunday. "Some 50 people came to our home at 6 a.m. and kicked down the door," Achakzai said, adding that police filed a case against his son under the cyber crime law on Wednesday.

Police had shown him the filing, he said.

"We weren't allowed to talk to him or meet him," he said, adding he believed is son was arrested over social media posts.

The elder Achakzai said he believed his son was in trouble because his social media activity.

The Pakistani media watchdog Freedom Network said it was concerned about what it saw as "the authorities' zero-tolerance for critics on social media".

"The arrest of journalist Zafarullah Achakzai is a grim reminder that more arrests will follow for the same reason in the near future," the group said.

Authorities began cracking down on social media in May, with security officials saying that more than 200 accounts were under investigation.