BAHAWALPUR: At least 149 people were burnt alive and dozens injured when an oil tanker caught fire and exploded near Bahawalpur where a large number of people had gathered to collect petrol from the overturned tanker, rescue services said.

According to details, people from nearby areas were collecting fuel from the oil tanker which had skidded off the national highway and overturned in Ahmed Pur Sharqia on Sunday morning. A large number of motorcycles and vehicles can be seen burnt in the huge fire.

The injured were moved to Bahawalpur Victoria Hospital and other health facilities. The death toll may rise as the affected are said to be in critical condition.

The police said that oil tanker carrying 50,000 liters of oil was on its way from Karachi to Lahore when it slipped from road and overturned in Kachi Pul area, some eight kilometers off Ahmedpur Sharqia city.

“People living in roadside villages, carrying domestic pots rushed to the scene to collect oil and they also made phone calls to their relatives living in other villages to immediate come to collect oil,” they said.

They said that Motorway Police reached the scene and urged the people to keep them away from the tanker as fire could erupt in the vehicle, adding that but people including women and children did not respond to the request and continue collecting oil into pots.

Emergency was declared in the hospitals and doctors and paramedical staff were called in from other districts to cope with the calamity.

Ahmedpur Sharqia Health Center and Bahawalpur’s Victoria Hospital have no burn wards while the injured have suffered burn injuries on 80 percent part of their bodies. A major such facility is available in Multan’s Nishtar Hospital.

"According to the initial reports, somebody tried to light a cigarette, and when the spilt fuel caught fire, leading to the tanker´s explosion," Jam Sajjad Hussain, spokesman for the rescue workers service said.

Firefighters fought the flames for over two hours before extinguishing the fire.

Punjab Chief Minister Shehbaz Sharif expressed grief on the tragedy and sought immediate report into the incident. The CM directed officials concerned to make all the necessary arrangements for the treatment of the injured. 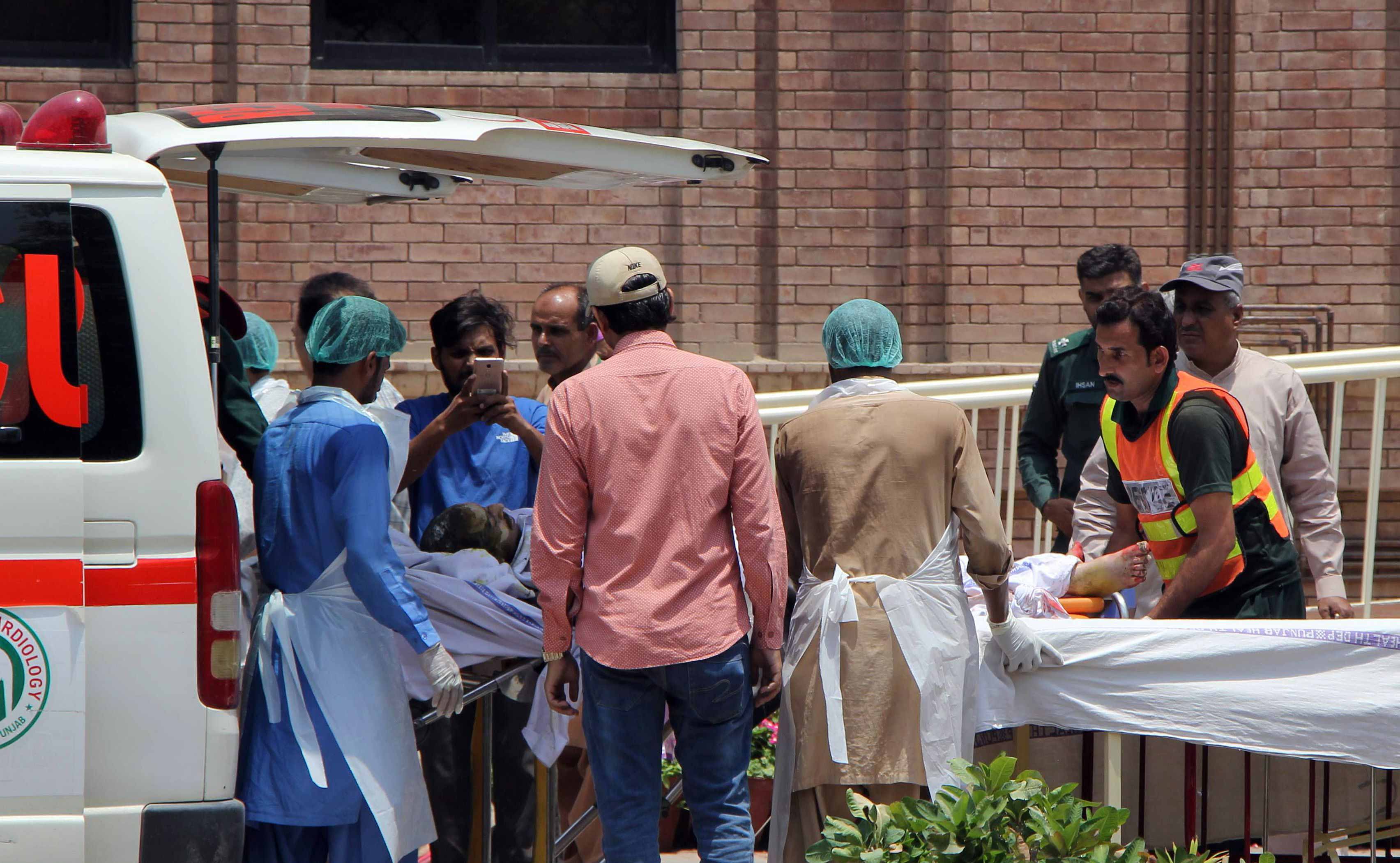 Paramedics bring a burns victim injured after an oil tanker caught fire following an accident on a highway in Bahawalpur to a hospital in Multan.

According to a statement from the ISPR, army’s military wing, COAS Gen Qamar Bajwa expressed grief on the losses in oil tanker incident and directed provision of full assistance to civil administration in rescue/relief effort.

Army Aviation helicopters have been sent for evacuation of casualties to hospitals and burn centres, while military hospitals were placed on high alert, it added.

Mohammad Shabbir, another villager, said the driver was shouting for people to stay away as the petrol could erupt at any time, but no one listened. "What is the use of this petrol, what will you do it with now?" he asked, pointing at a bucket in his other hand.

At least 62 people including women and children were killed in southern Pakistan in 2015 when their bus collided with an oil tanker, starting a fierce blaze that left victims burnt beyond recognition.

President Mamnoon Hussain and Prime Minister Nawaz Sharif were shocked over the incident and directed government officials to help the victims in every possible way.

PM Nawaz expressed his grief and directed the government of Punjab to provide "full medical assistance".

Have asked ldrship present in area to immed assess what assistance can be provided to the injured and to families of victims. https://t.co/E1aTtoocke

VIDEO: Who is 'Senate's granny'?