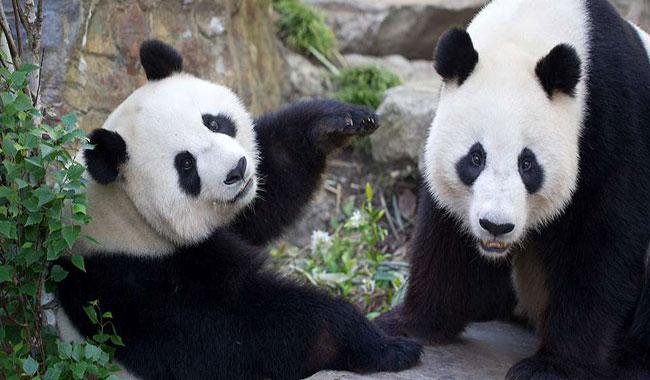 BERLIN: Two long-awaited giant pandas from China will arrive in Germany in two weeks time, with Berlin rolling out the red carpet for the furry ambassadors´ arrival.

The two new residents, Meng Meng and Jiao Qing, will fly into Berlin on a special Lufthansa cargo plane on June 24, accompanied by two Chinese vets, Berlin zoo´s chief vet, and a tonne of bamboo.

The pandas will be served "bamboo snacks" and water, and their transport box kept dry and odourless with absorbent mats during the 12 hour and 20 minute-long flight.

Meng Meng means "dream" in Chinese while the zoo says Jiao Qing translates to "darling", although the Chinese characters are a composite of "tender" and "festive".

Ahead of their arrival, Berlin zoo, the bears´ new home, has built a 1,000 metre square (10,700 square feet) enclosure, which includes a wooded climbing area.

The zoo will also pay a million dollars a year (920,000 euros) for the 15-year contract to host the pair, with most of the funds going towards a breeding research programme in China and the protection of pandas in their natural habitat.

Chancellor Angela Merkel previously announced that Germany was in talks with Beijing to bring a pair of the rare bears to Berlin during a visit to China in 2015
Famed for its "panda diplomacy", China has sent its unofficial national mascot to only around a dozen countries, to signal their healthy ties with Beijing.

After a period of acclimatisation in their new Berlin home, Meng Meng and Jiao Qing are expected to presented to the public.

As Chinese President Xi Jinping is due to travel to Germany to attend the G20 summit on July 7 and 8, German media has speculated that he and Merkel may jointly unveil the cuddly bears on July 5.

China has previously gifted three pandas to Germany, but the last one, 34-year-old Bao Bao, died in Berlin in 2012 -- he had been the oldest male panda in the world.
Fewer than 2,000 giant pandas are estimated to remain in the wild, in three provinces in south-central China.