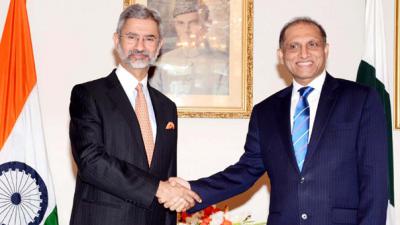 ISLAMABAD: Pakistan and India on Tuesday resolved to promote bilateral as well as regional cooperation in the first round of bilateral talks since Narendra Modi assumed power in New Delhi.

After a meeting with Indian counterpart Subrahmanyam Jaishankar, Foreign Secretary Aizaz Chaudhry told media persons that a host of issues ranging from Kashmir, implementation of 2003 ceasefire agreement, Samhjhota Express to Indian involvement in Fata and Balochistan came under discussion during the talks.

Chaudhry said that the Indian foreign secretary handed over a letter from Prime Minister Modi to his Pakistani counterpart Nawaz Sharif.

Subrahmanyam Jaishankar, on the occasion said that Pakistan and India have agreed to work together to find common ground and narrow differences on all bilateral matters.

He said the talks were held in very constructive and positive atmosphere. Both the sides engaged on each other’s concerns and interests, he added.

Jaishankar said the two sides have agreed on ensuring peace and tranquility on the border. He said his country wants to forge cooperative relations with all the neighbouring countries.

Earlier in the day, Jaishankar, accompanied by the Indian High Commissioner and members of his delegation, met with Prime Minister Nawaz Sharif.

The Indian diplomat said that Pakistan will be the next South Asian Association for Regional Cooperation (SAARC) host and that India would like to work with Pakistan to help SAARC achieve its potential.

Jaishankar arrived in Pakistan on Tuesday for a two-day visit and was welcomed in Islamabad by the Indian High Commissioner as well as senior officials of the Foreign Ministry.

According to the Foreign Ministry, Kashmir, Siachen, and Sir Creek were amongst the issues that were discussed during the Foreign Secretaries talks earlier in the day.

Pakistan and India had last held the formal round of talks in 2012, which saw the then Foreign Minister Hina Rabbani Khar coming to table with her Indian counterpart S M Krishna.

Since then, efforts were made several times to hold the next round of talks but in vain.

Pakistan and India had agreed to resume the secretary level talks two-months after PM Sharif visited New Delhi in May 2014 to participate in the inauguration of his counterpart Narendra Modi on the latter’s invitation.

It was agreed that the dialogue would resume in Islamabad on August 25, 2014. However, India cancelled the talks following Pakistan High Commissioner Abdul Basit’s meeting with Kashmiri leaders.

Gold prices decrease in Pakistan by Rs300 per tola