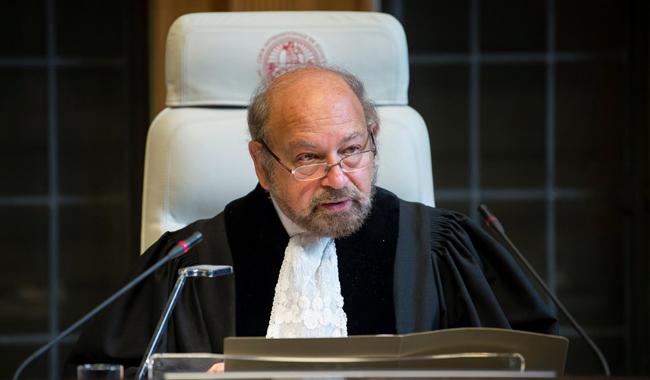 THE HAGUE: The UN´s top court on Thursday ordered Pakistan to stay the execution of an Indian spy Kulbhushan Yadav, who is convicted of spying.

Judges at the International Court of Justice (ICJ) ruled in a unanimous and binding decision that Kulbhushan Sudhir Yadav must not be executed by Islamabad until they have had time to pass final judgement in the case.

Yadav was arrested from Balochistan in March 2016 and Pakistani officials say he has confessed to spying for Indian intelligence services. He was convicted last month by a military court and sentenced to death.

But India has maintained he is not a spy, and has accused Pakistan of violating the Vienna Convention by failing to provide him with consular access, as well as breaking international human rights law.

"Pakistan shall take all measures at its disposal to ensure that Mr Yadav is not executed pending the final decision in these proceedings," said the court´s president Ronny Abraham.

He also ordered Pakistan to inform the tribunal that it has implemented the decision, and stressed that ICJ decisions are binding on all state members.

Outlining the reasons for its decision, Abraham said Pakistan had "given no assurances" Yadav would not be executed before the court delivered its final decision.

Therefore the court was "satisfied there is an urgency in this case."

The case -- a rare foray for the two South Asian nations into the international courts -- has highlighted the recent sharp upsurge in tensions between the nuclear-armed rivals.

India lodged its case against Pakistan earlier this month, and the ICJ has yet to decide whether to take it up. The hearings and, final decision, could take more many months if not years.

The ICJ was set up in 1945 to rule on disputes between nations in accordance with international law.

Yadav reportedly joined India´s National Defence Academy in 1987 and was commissioned as an engineer in the Indian Navy in 1991.

The son of a retired police office, his neighbours in Mumbai where he lived with his wife and two children, remember him as a shy but helpful man who was good at sport and academic, according to the Hindustan Times newspaper.

Indian lawyer Deepak Mittal told the tribunal in a day-long hearing on Monday that Yadav was "an innocent Indian national" who had been held incommunicado "for more than a year on concocted charges".

But Pakistani representatives accused New Delhi of "political grandstanding" and told the court Yadav "has confessed to having been sent by India to wage terror on the innocent civilians and infrastructure of Pakistan".

The last time India and Pakistan took a dispute to the ICJ was in 1999 when Islamabad protested against the downing of a Pakistani navy plane in which 16 people embraced martyrdom.

In that case, the tribunal decided it was not competent to rule in the dispute and closed the case.

India and Pakistan routinely accuse one another of sending spies into their countries, and it is not uncommon for either nation to expel diplomats accused of espionage, particularly at times of high tension. But death sentences have rarely been issued in recent years.