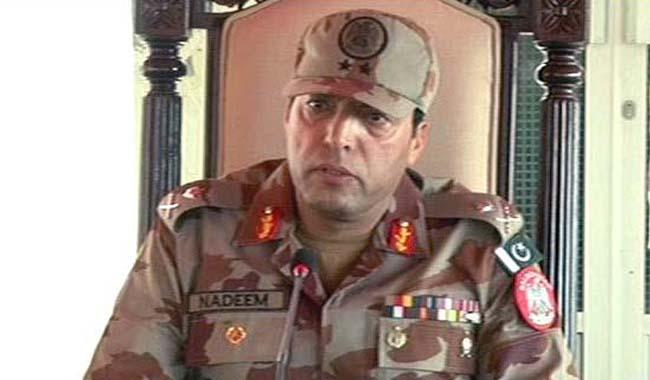 CHAMAN: Inspector General FC (IGFC) Major General Nadeem Ahmad on Sunday said that at least 50 Afghan soldiers were killed and over 100 injured when Pakistan responded to the firing by Afghan border police.

Briefing the media on the Chaman border incident, the IGFC said we will never allow any country to cross its territorial boundaries.

He said that Afghan border forces tried to interfere in the census drive in the border areas on last Thursday and opened fire on FC personnel deputed on the census duty.

He said that the Pakistani forces retaliated and targeted those afghan posts from where fire was opened.

In this unfortunate incident about four to five Afghan posts were destroyed and over 50 Afghan security personnel were killed and 100 injured, the officer added.

On Thursday, the Afghan border forces martyred 11 Pakistanis, including a soldier, and injured over 40 others, despite the fact that Pakistan had conveyed well in advance that the concerned authorities were undertaking a population census in the area.

The shelling continued from the Afghan side for 10 hours, while the Pakistani troops also promptly retaliated and killed several Afghan soldiers besides destroying their three check posts.

Tension prevailed at the border on the third consecutive day on Sunday as the administration directed residents of villages near the border to vacate the area.

The gunfight prompted the Pakistani authorities to shut down the Bab-e-Dosti border gate in Chaman -- which leads from Balochistan into Kandahar, and is one of only two major crossing points.

Deputy Commissioner Chaman Qaiser Khan said that residents of Kali Luqman, Kali Jahangir and other villages bordering Afghanistan had been directed through loudspeakers and pamphlets to immediately vacate their areas and move to safer locations.

Gunship helicopters conducted regular aerial surveillance of the border area, while schools, offices and markets in the nearby areas remained closed.

“Over 2,000 families near the Chaman border were affected by the firing of Afghan forces,” DG PDMA Tariq Hussain said. Distribution of relief supplies to the affected areas have started. Supplies include tents, blankets, tarpaulins, utensils and food items.

The PDMA has also established an emergency cell in Chaman to meet any emergency. Ambulances, medical staff and medicines are available at the centre.