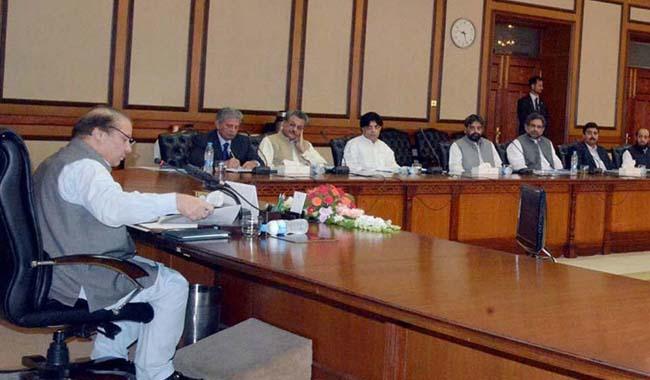 ISLAMABAD: The federal cabinet on Thursday that met here under the chairmanship of Prime Minister Nawaz Sharif approved the recommendations on FATA reforms.

The cabinet gave go ahead to the merger of the tribal region with Khyber Pukhtunkhwa, the most contentious issue hindering the implementation of the FRC report.

A committee headed by Adviser on Foreign Affairs Sartaj Aziz has formulated a set of recommendations for bringing the tribal areas into the national fold including the merger with KP.

PML-N ally JUI-F had opposed the merger and it was on Maulana Fazlur Rehman’s pressure that the matter was removed from agenda of the last cabinet meeting.

The Fata parliamentarians had threw their full weight behind the committee report and even demanded immediate merger to enable the tribesmen take part in 2018 general elections.
A 10-year plan envisaged development of Fata; repeal of the FCR; establishment of high court and Supreme Court benches; merger with KP; recruitment of 20,000 locals in Levies to replace army troops.

It is worth mentioning that the government committee has in its reforms package proposed a 3 percent of national resources for the development of Fata areas till it was merged with the KP province and if the package is held in abeyance on any pretext the tribal belt would continue to be deprived of additional financial resources to change their economic and infrastructure development for, any fund that is released through the present system would have no assurance it would be judiciously spent.