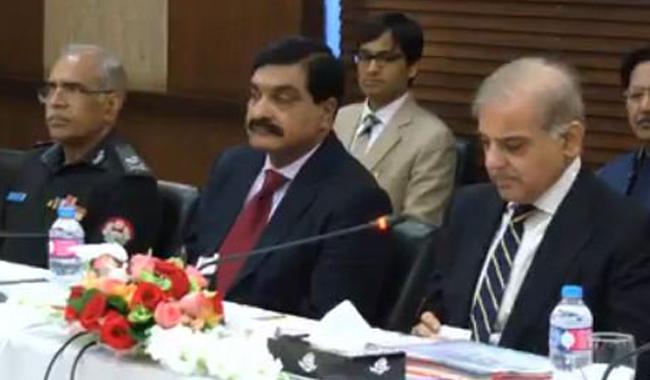 LAHORE: Punjab government has decided to further expand intelligence based operations in the province to overcome the scourge of terrorism with the help of Rangers.

This was decided at a meeting of Provincial Apex Committee chaired by Chief Minister Shahbaz Sharif in Lahore on Sunday.

The meeting decided to take action against terrorists and their facilitators without any discrimination and distinction. It also decided to launch ruthless campaign against the terrorists.

The meeting was briefed about arrest of those responsible for Lahore suicide attack and busting of terror networks, and appreciation was also given to provincial Counter Terrorism Department (CTD), and timely and effective performance of the Punjab government.

The meeting, however, apprehended that terrorist network from Afghanistan might be used in the terrorist attack in Lahore and it was also decided that the Punjab government would seek help from Rangers and in this matter.

The procedure details would be set separately, and there would be focused and indiscriminate operation against terrorists and their facilitators.

Those who will provide sanctuary to these terrorists would also not be spared.

The meeting also decided to broaden scope of operation on the basis of intelligence and to take strong measures to stop illegal movement of Afghan migrants, while bordering divisions of Punjab would be monitored, besides enhancing cooperation between all intelligence networks to tackle any internal and external challenges and to have the meeting of provincial intelligence committee on regular basis.

The Provincial Apex Committee also decided to take indiscriminate operation against all the banned organizations and to arrest all active workers of these organizations.

It was also decided to stop all sources that provide financial assistance to these banned organizations and to provide fool proof security to foreigners and all CPEC related projects.

During the meeting, recent incident of terrorist attack in Lahore was strongly condemned and Fateha was offered for those who lost their lives and condolences were also offered to the bereaved families.

While addressing the meeting, the chief minister said they would not let anyone play with fire or blood on Quaid-e-Azam's Pakistan, this war would continue till complete eliminationof terrorism and those responsible for it, would be brought to justice.

The chief minister said political and military leadership was on the same page in this war against terrorism, asserting that terrorists would be held accountable for every drop of blood.

The meeting also reviewed progress on the initiatives taken under the National Action Plan to end terrorism, militancy, extremism and sectarian violence in the country.