Terrorism from Afghanistan testing our policy of restraint, COAS tells US Commander 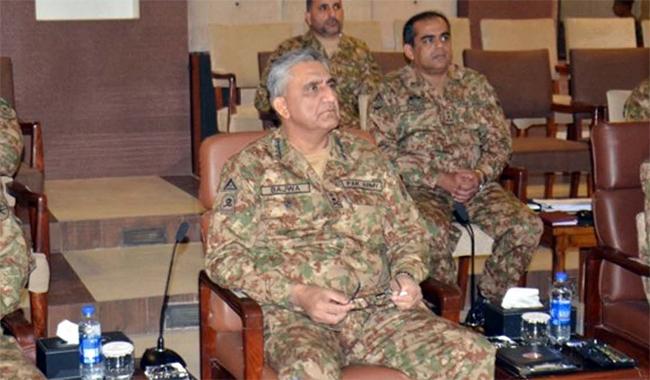 RAWALPINDI: The Chief of Army Staff, General Qamar Javed Bajwa on Friday made a telephone call to US General Commander in Afghanistan, General John Nicholson and expressed his concerns over continued acts of terrorism in Pakistan with impunity from Afghanistan.

According to the statement issued by Inter Services Public Relations, during telephonic conversation with John Nicholson, Resolute Support Mission (RSM) Commander in Afghanistan, Army Chief expressed his concerns over continued acts of terrorism in Pakistan with impunity from Afghanistan, saying most of the incidents in Pakistan are claimed by terrorist organisations with leadership hiding in Afghanistan.

He said, “Such terrorist activities and inaction against them are testing our current policy of cross border restraint.”

The Army Chief asked Commander RSM to play his role in disconnecting this planning, direction, coordination and financial support.

General Bajwa also informed the US General about list of terrorists handed over to Afghan authorities for action against them who are hiding inside Afghanistan since long.

US General expressed his condolences on loss of precious lives in recent terrorist incidents and assured the Army Chief full assistance in response to his concerns.

The US General also shared his plans to undertake special coordination at appropriate level between RSM, Afghan Security Forces and Pakistan.