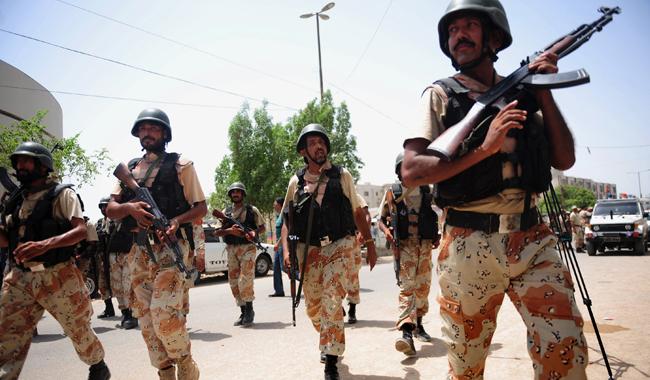 AT least 37 terrorists were killed in encounter with the law enforcement agencies.

A statement from the Sindh Rangers said at least 18 terrorists had been killed in operations in Karachi overnight, while in separate security operations, six were killed in Orakzai; four in Bannu’s Bakka Khel; two killed in a police encounter in DI Khan; three shot dead in Peshawar during search operation and two were killed in Sargodha.

The Islamic State group (IS) claimed the Sehwan attack, which came after a series of bloody extremist assaults this week.

"Both the federal and provincial law enforcement authorities and police started a crackdown across the country before dawn, and scores of suspects have been arrested from different cities," a government official speaking on condition of anonymity told AFP.

He said the sweeping operation will continue for the coming days.

The popular shrine´s white floor was still smeared with blood, with scattered debris including shoes, shawls, and baby bottles. At least 20 children are believed to be among the dead, the head of Sehwan´s medical facility Moeen Uddin Siddiqui said.

At 3.30 am the shrine´s caretaker stood among the carnage and defiantly rang its bell, a daily ritual that he vowed to continue, telling AFP he will "not bow down to terrorists".

The Sindh provincial government announced three days of mourning as Pakistanis vented their grief and fury on social media, bemoaning the lack of medical facilities to help the wounded, with the nearest main hospital some 130 kilometres from the shrine.

The medical facilities in Sehwan are basic, and many of the injured were flown to Karachi and other major towns of Sindh in military planes and helicopters.

Pakistan has seen a dramatic improvement in security in the past two years, but multiple attacks this week -- most claimed by the Pakistani Taliban -- has undermined the growing sense of optimism.

Iqbal plays down claims of rifts within PML-N