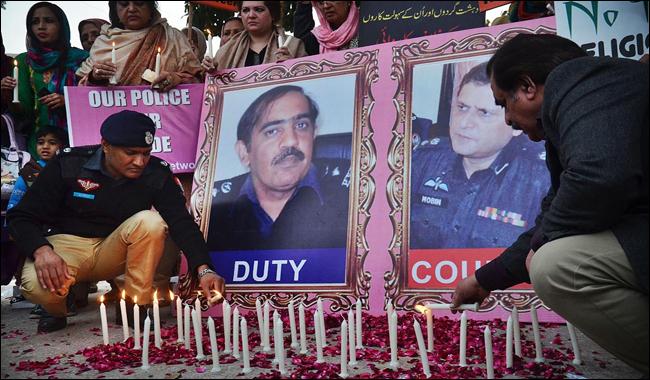 KARACHI: More than 100 people have lost their lives in recent wave of terror attack in Pakistan beginning from Lahore where senior police officials were targeted.

The security forces that include police and armed forces, judges, media personnel and ordinary people including women and children are targeted in the eight terrorist attacks in five days.

All the four provinces and FATA tribal agencies came under these attacks.

Today’s suicide blast was the most brutal attack from all the eight in which more than 70 people including women and children were martyred and over 250 sustained critical injured at the shrine of Sufi Saint Hazrat Lal Shahbaz Qalandar in Sehwan Sharif .

The high death toll at the shrine makes it one of the worst attacks in Pakistan in recent years.

Earlier today, three Pakistan Army personnel including a Captain were martyred when an IED exploded on its convoy in Awaran, Balochistan.

Starting from Monday, at least 13 persons lost their lives and 80 others were injured in a deadly suicide blast outside the Punjab Assembly. DIG City Traffic Police Capt (retd) Ahmad Mobin Zaidi and Acting DIG (Operations) Zahid Gondal were among the six police officials martyred in the attack.

Hours after Lahore blast, a senior bomb disposal squad officer along with a colleague were martyred while trying to defuse a bomb in Quetta.

On Wednesday, at least one person was killed and 18 others including five civil judges sustained injuries in a suicide attack in Peshawar’s Hayatabad area, police and rescue sources said.

Judges were targeted in the Peshawar attack.

Earlier, on the same day on Wednesday five people including three levies personnel were martyred and several others injured in a suicide attack at the Mohamand Agency headquarters.