DADU: More than 70 people including women and children were martyred and over 250 sustained critical injuries in a suicide attack at the shrine of Sufi Saint Hazrat Lal Shahbaz Qalandar in Sehwan Sharife on Thursday, medics and police said.

Thousands of devotees from across the country arrive at the shrine of Lal Shahbaz Qalandar every Thursday.

Police have confirmed it was a suicide blast.

Police officials in Sehwan said the blast took place inside the shrine with the Assistant Superintendent of Police Rashid stating it was a suicide bombing.

The News reporter Imdad Soomro said the condition of more than 50 pilgrims is critical, the number of death toll could rise as there is only one small hospital in the area.

However, emergency has been declared in the hospitals of Hyderabad, Dadu and Jamshoro.

Police and security forces have cordoned off the area.

DG ISPR in his tweet said Army and Rangers personnel have been moved with medical support.

A spokesman for medical charity Edhi said the attacker appeared to have targeted the women´s wing of the shrine, and around 30 children accompanying their mothers were dead.

Senior police officer Shabbir Sethar told Reuters from a local hospital that the death toll was likely to rise. "At least 72 are dead and over 150 have been injured,"
Sethar said by telephone.

Television footage from the famous Lal Shahbaz Qalandar shrine in the town of Sehwan Sharif showed army and paramilitary medical teams reaching the site and injured people being taken to nearby hospitals in ambulances and a military helicopter.

"We were there for the love of our saint, for the worship of Allah," a wailing woman told a television channel outside the shrine, her headscarf streaked in blood.
"Who would hurt us when we were there for devotion?"

The attack comes as the Pakistani Taliban and rival Islamist militant groups carry out their threats of a new offensive. The violence has shattered a period of improving security, underscoring how militants still undermine stability in the country.

The high death toll at the shrine makes it one of the worst attacks in Pakistan in recent years. In August last year, at least 74 people, mostly lawyers, were killed in a suicide bombing of a hospital in the southwestern city of Quetta.

In November, an explosion claimed by Islamic State ripped through a Muslim shrine in southwestern Pakistan, killing at least 52 people and wounding scores.

At a crossroads of historic trade routes, religions and cultures, the southern province of Sindh where the shrine is  located has always been a poor but religiously tolerant region, helping to shield it from much of the violence more common in other parts of Pakistan.

The country´s powerful military, which has cracked down on insurgent groups in recent years leading to a sharp drop in militant violence, vowed a swift, decisive response.

"Each drop of nation´s blood shall be revenged, and revenged immediately. No more restraint for anyone," Army Chief Qamar Bajwa said in a statement.

Shortly after the blast, the army announced it was closing the border with Afghanistan with immediate effect for security reasons.

Insurgents operate on either side of the neighbours´ long and porous frontier. Different militant groups, often trying to outdo each other, say they are responsible for the bombings.

In the case of the Quetta hospital blast, both a faction of the Pakistani Taliban - Jamaat-ur-Ahrar - and Islamic State claimed responsibility. Jamaat also said it was responsible for a bombing in the eastern city of Lahore earlier this week that killed 13 people.

In a separate incident late on Thursday, gunmen on a motorbike killed three policemen and one civilian in the city of Dera Ismail Khan.

"The bomber entered the shrine as crowds massed on Thursday, a statement from the Sindh police spokesman said. Rescue officials said dozens of wounded people were being ferried in private cars to hospitals. 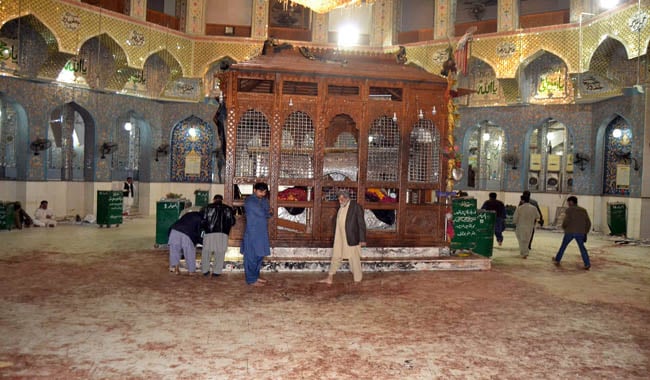 The nearest major hospital was nearly an hour´s drive away in Dadu district. Prime Minister Nawaz Sharif quickly condemned the bombing, decrying the assault on the Sufi religious minority. He vowed to fight militants, who target the government, judiciary and anyone who does not adhere to their strict interpretation of Sunni Islam.

"The past few days have been hard, and my heart is with the  victims," Sharif said. "But we can´t let these events divide us, or scare us. We must stand united in this struggle for the Pakistani identity, and universal humanity.

"An ancient mystic branch of Islam, Sufism has been practised in Pakistan for centuries. Lal Shahbaz Qalander is Pakistan´s most revered Sufi shrine, dedicated to a 13th-century saint in Sehwan Sharif.

Thursdays are an especially important day for local Sufis, meaning that the shrine was packed at the time of the blast.