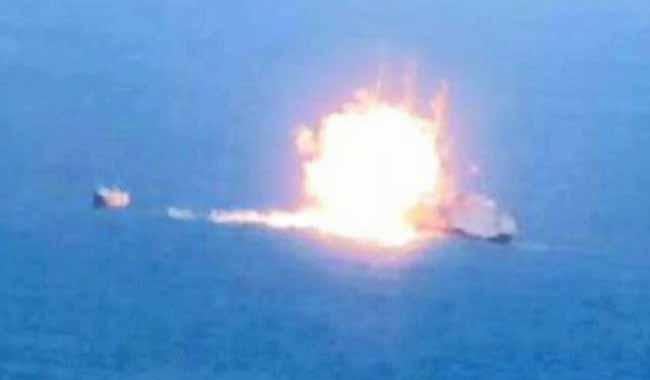 KARACHI: At least seven Pakistanis are reportedly killed in a rocket attack on a cargo ship off Yemen coast, Geo News reported on Thursday.

All the members of crew of the Iranian ship were Pakistani nationals and an officer identified as Kabir is said to have rescued his life by jumping off the vessel as it started sinking after catching fire.

The ship MV Joya was heading to Dubai from Egypt when it came under attack in Yemeni waters. There was no claim of responsibility for the attack.

Meanwhile a prominent Pakistani human rights activist Ansar Burney issued a statement on his facebook page with regard to the incident, saying The unfortunate cargo ship "MV JOUYA-8"  having flag of Iran was heading towards Gulf from Egypt via Sea of Hodeida Yemen where a strayed or aimed rocket hit the ship which caused destruction of the ship.

"Ansar Burney Trust International has received information through its sources that an unfortunate ship namely "MV JOUYA-8" has been hit by a rocket in Sea of Yemen
and reportedly destroyed. "So far only one Pakistani has managed to survive some how who managed to swim towards an island," according to the statement.

Thousands of people have been killed in an on going conflict in Yemen between two factions claiming to constitute the government.