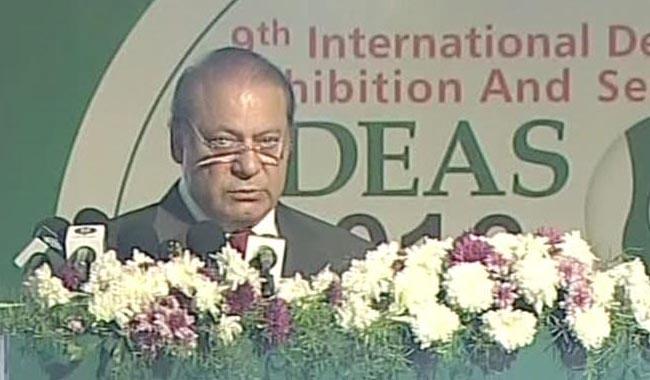 KARACHI: Prime Minister Nawaz Sharif on Tuesday said Pakistan was against an arms race in the region, however would pursue the motto of ‘arms for peace’.

Addressing at the inauguration of four-day ninth International Defence Exhibition and Seminar (IDEAS) here, the prime minister said Pakistan was committed to discouraging arms race and promoting “the motto of arms for peace, which has always been the tagline of IDEAS”.

The prime minister said Pakistan had achieved self-reliance in defence production and mentioned that IDEAS-2016 was a demonstration of collaboration of local and foreign technologies.

He said over 2,000 weapons system and equipment on display at the exhibition reflected broad-based participation of the country’s public and private sector in defence production, supported by research and development.

The PM said the country’s defence products were state-of-the-art and stood fully tested by its armed forces.

“Our defence products have made their mark in many countries of the world,” he said, adding there still existed many opportunities for further growth and exploration of new markets.

“The promise of today’s Pakistan is brighter and reassuring than every before,” he said.

He invited foreign companies to expand their business linkages with Pakistan in the field of defence production.

He expressed Pakistan’s commitment for regional peace, saying that “we will explore the way forward for peace and stability in the world in general and our region in particular”.

Nawaz Sharif said the environment for foreign investment was encouraging in the country in view of improved law and order situation, besides power projects being completed on time.

He congratulated the organizers of sideline conferences during IDEAS 2016, which he said would facilitate exchanging technologies for mutual benefits and bringing together buyers and sellers – one of the core objectives of the country’s defence exhibitions.

Thirty-four countries and a total of 418 companies are participating in IDEAS 2016, including 261 foreign and 157 Pakistani companies.

The exhibition will continue till November 25.

A uniform curriculum is an achievement for the govt, says PM Imran Khan