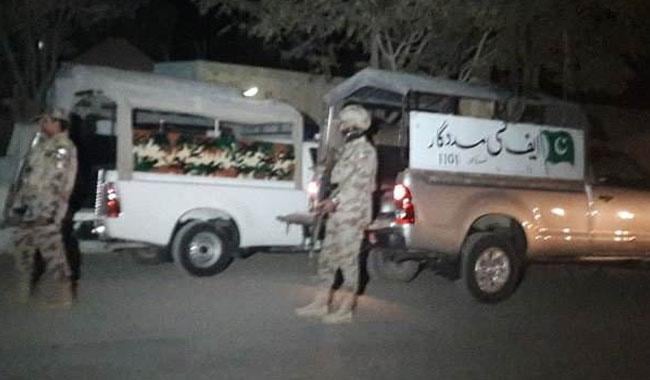 QUETTA: The security operation against militants who had conducted an attack on Quetta's Police Training Centre on Monday, was underway as 250 cadets who were held hostages were rescued and two militants were killed by the LEAS. 59 cadets were martyred in the attack and 116 were injured.

Security forces were able to clear the area after 5 hours and the entry, exit routes were opened for traffic in the morning. A large number of security officials returned to the barracks after conducting a search and sweep operation, declaring the training centre clear. Bodies of the martyred police cadets were shifted to Police Line, where their funeral prayers will also be offered later during the day.

He praised the armed forces for carrying out a swift operation against the militants and securing the area.

"Within three hours the operation was concluded," he said. "What could be better than that?"

Speaking to media personnel, Balochistan Home Minister Sarfraz Bugti said that a definitive death toll could not be ascertained at the moment yet the expected toll could be anywhere between twenty to thirty officials. He said that the militants had targeted the guard of the hostel before entering the premises.

"The militants targeted the sentry stationed at the watch tower," he said. "He fought bravely against the militants but embraced martyrdom," he added.

"The attackers were receiving directions from Afghanistan," he said.

He praised the security forces for clearing a majority area of the compound within four hours and in the absence of proper lighting.

Security forces killed two terrorists and rescued 250 cadets who were held as hostages. The search and sweep operation was almost nearing conclusion, as sources claimed that two out of the three compounds had been cleared from militants.

According to the ISPR, 5-6 terrorists entered the hostel of the Police Training Centre and opened indiscriminate fire. ISPR also disclosed that FC personnel and police had reached the place of the attack and surrounded the training centre.

An emergency was imposed across hospitals in Quetta. According to sources, four cadets, who got injured while escaping from the attack, were shifted to a nearby hospital for medical treatment. Hospital sources confirmed that injured persons were admitted into Quetta Civil Hospital and Bolan Medical Complex for medical treatment.

Sources claimed that three blasts were heard from inside the Police Training Center, which most likely resulted from suicide bomb attacks.

We had received intelligence reports of the attack 4-5 days ago: CM Balochistan

Speaking to Geo News, Balochistan Chief Minister Sanaullah Zehri said in response to a question that the government had received intelligence reports a couple of days earlier of the presence of a couple of militants who had entered Quetta to carry out subversive activities.

"I am personally monitoring the security situation at the moment," he said. "Those responsible for the terrorist attack will be brought to book," he added.

Zehri said that as soon as the government had received intelligence reports of the presence of militants in the city, Quetta had been put on high alert.

As soon as the attack took place at the Police Training Centre located at Sariab Road, #Quetta started trending at number 1 in Pakistan. Here are some tweets which were doing the rounds on micro-blogging site Twitter:-