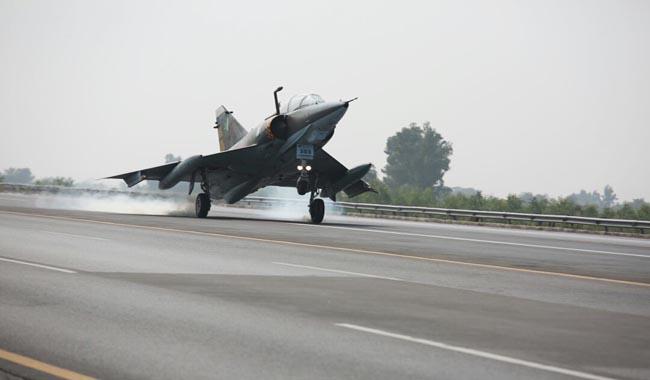 KARACHI: Pakistan’s war planes landed on Islamabad-Lahore Motorway on Thursday in a display of Air Force capabilities in what was described as routine drill.

The Pakistan Air Force which has state of the art F-16, and JF-17 along with F-7 and Mirage in its fleet demonstrated the landing on the motorway as part of largest and most comprehensive exercise and is held about every five years.

Defence Minister Khawaja Muhammad Asif  tweeted images of air force jets taking off from motorways. “The defenders or our skies, in a state of constant readiness, Alhamdolillah. Our motorways are our runways,” the minister said.

The defenders of our skies, in a state of constant readiness, Alhamdolillah. Our motorways are our runways. #PAF pic.twitter.com/dAuEcVDOWL

According to PAF spokesperson these exercises are conducted annually within the country and abroad. Tensions run high between Islamabad and New Delhi following an alleged militant attack in Occupied Kashmir that killed over a dozen Indian soldiers last week.

New Delhi has long accused Pakistan of fueling violence in Occupied Kashmir where Indian forces have killed tens of thousands of innocent people over the last few decades.

Prime Minister Nawaz Sharif on Wednesday called on  United Nations to play its role in resolving the Kashmir dispute.

NCOC finalises SOPs for cattle markets ahead of Eid-ul-Azha

Afghanistan exports through Wagah border to be restored from July 15: FO