Amjad Sabri: a look back at the life of the legendary qawwal

KARACHI: The whole nation was gripped with shock and horror at the cold-blooded murder of renowned Pakistani qawwal Amjad Sabri on Wednesday.

Sabri was gunned down in Karachi's Liaquatabad area as he was on his way to a television channel's studio when a couple of armed assailants opened fire at his vehicle. With six shots fired, two proved to be fatal for the singer.

Amjad Sabri was born on December 23, 1976 to a household which was famous for qawwal, the traditional form of music associated with devotion to holy personalities in Islam. His father was Ghulam Fareed Sabri and he is the nephew of Maqbool Sabri. Together, Maqbool and Ghulam Fareed formed the duo of the Sabri brothers, who went on to garner national and international acclaim. 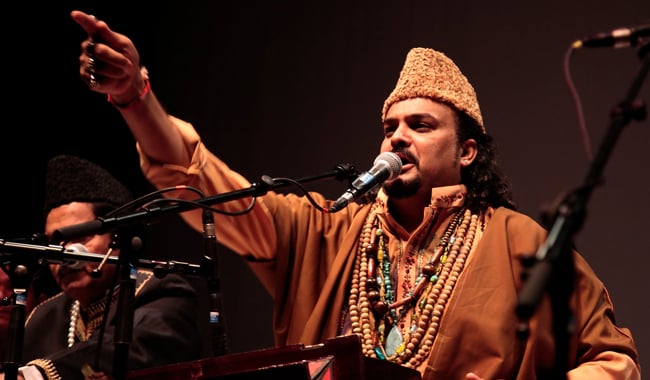 It was under his father's training and supervision that Amjad Sabri learnt how to sing qawwalis. It was Ghulam Fareed Sabri who introduced him to classical music and ever since then, there was no looking back for Amjad Sabri.

Once in an interview, he had described how his father used to train him when he was a little boy.

"The hardest part was being awakened at 4.00 am. Most riyaz is done in Raag Bhairon and this is an early morning raag. My mother would urge our father to let us sleep but he would still wake us up," he had said. "Even if we had slept after midnight, he would get us out of bed, instruct us to make wuzu, perform tahajjud prayers, and then take out the baja. And he was correct in doing so because if a raag is rendered at the correct time, the performer himself enjoys it to the fullest."

Amjad Sabri presented the work of his father and uncle in a new light, which helped the younger generation connect to qawwali, something which had not happened earlier. 'Tajdar-E-Haram', 'Mera Koyi Nahi Teray Siwa' and 'Bhar Do Jholi' were some of the works of the renowned Sabri family which were sang in a more different and unique way by Amjad Sabri.

The previous year, he had threatened to sue the makers of Bajrangi Bhaijaan for using the song 'Bhar Do Jholi' in the movie. 'Bhar Do Jholi' was the famous qawwali of the Sabri brothers and Amjad had felt hurt when it had been used without his permission.

Friends, family members and colleagues described him as someone who was kind-hearted and harboured a warm personality. Amjad Sabri was undoubtedly the face of Pakistan's qawwali music and he will be sorely missed for his contributions.

Which top trending news were Pakistanis most interested in 2022?