The taste of terror

We come across a range of things every day that are not important to us except for their mundane utility. A bar of soap, a slice of cake, a tub of ice cream, a can of coke, a jar of oil, a bottle of juice, a collection of spoons, knives, forks, dishes, teapots, chairs, tables and beds are not significant apart from their functional aspect. They are dispensed with or replaced soon after being used/ consumed.

It is only when an artist decides to represent one of these ordinary and familiar products that it attains a longer life, in some instances, eternity. We still watch the apples painted by Paul Cezanne even though those decayed soon after the French painter put their likeness on canvas. Campbell Soup cans are mentioned nowadays, mainly in reference to Andy Warhol’s artwork depicting thos; so are his (detergent) Brillo boxes. Leonardo da Vinci rendered a loaf of bread placed on the table surrounded by Jesus Christ and his disciples in his The Last Supper. A person who has looked at this image, would see every piece of bread through the eyes/ hands of the Renaissance master. Artists, though mortal beings, have the power to immortalise what they portray in their creations. Vincent van Gogh’s Sunflowers is another example: here’s a bunch of flowers that will never wither in the memory of mankind.

Occasionally, when artists pick an object or a subject, they transform it (to begin with, turning it into a flat visual, or modifying its material with others: wood, stone, plaster, bronze, or convert it into a virtual entity). They also contribute to changing our perception, understanding and connection with a certain article or idea by challenge our knowledge, beliefs, prejudices and positions. Watching the recent work of Sabina Gillani (from her recently concluded exhibition, Hazaar Dastan, January 18-27 at Canvas Gallery, Karachi) can cause one to start speculating about some simple, solid and straight truths.

An accomplished printmaker and painter, Sabina Gillani, has been drawing images that address the phenomenon of terrorism in Pakistan. Sensitive renderings of suicide jackets/ vests, detonating devices, clusters of wires and explosives, remind of a past that has not entirely passed away (on January 20 there was a bomb explosion in Lahore). Gillani’s mixed media works on paper – created between 2009 and 2019, include references to terrorism, extremism and violence; through weapons, victims and bloodshed. She documents details about these tools of death and destruction in such precise manner that one tends to admire these images.

In that respect Gillani’s approach is not different from that of other artists, writers and film makers, who depict misery – the only reality of current times. In doing this, they do not discriminate between good and bad, pious and sinful, vitreous and criminal. When they show evil, they take great care to portray their subject in a way that it is justifiable as art. Bad is bad, but that does not make it liable to be presented badly. (Quite often the baddies are glamourised, if not glorified.)

Gillani’s mixed media works on paper – created between 2009 and 2019, include references to terrorism, extremism and violence through weapons, victims and bloodshed. She documents details about tools of death and destruction in such a manner that one tends to admire those.

Sabina Gillani portrays gadgetry of detonation, along with spilled paint and stains in her art. These layers – different saturations, stages and spread of blood, allude to a sad situation but these are also an artist’s marks, delightfully produced, sensitively overlapped and seductively modulated. They have been created with gouache, pigment and tea stain on handmade paper. A number of other works from 2017 to 2019 have a white kurta, blood splattered and filled with interwoven patterns.

These garments may be linked to terrorists or their victims. Blood traces, streaks, splotches, smudges suggest a history of power struggle, oppression, exploitation, ignorance and aggression. These also reveal the artistic expression of an individual who enjoys letting colours spill, bleed and blend. Salima Hashmi, the curator of Sabina Gillani’s show, talks about a few pieces that take us back to Gillani’s years of printmaking, especially at the Slade School of Fine Art, London. She quotes the artist: “In printmaking one starts with an intensely laborious process in the preparation of a pristine surface: polishing an etching plate and grinding a lithographic stone…. Then one proceeds to destroy and break down the surface built with such laborious care to create something new; this process is like a dialogue between the surface and the artist.”

One feels that in her recent work, the artist has added blood like blobs as if these were accidental marks she discovered in her process, or/ and stains from our political, religious history. This brings to mind Faiz Ahmed Faiz’s verses on visiting Bangladesh after the 1971 war: Yahan say kutch nahin khulta, yeh phool hain keh lahoo (It’s difficult to discern from here, whether these are roses or blood). Nevertheless, the body of works completed in 1993 and 1994 (etching and lithograph) has much in common with that fabricated in 2018 and 2019. It is the presence of a sweeping stroke, a sensitive smear, a controlled yet not constrained daub that connects Sabina Gillani’s aesthetics of Slade School days to her later blood-drenched imagery.

Irrespective of whether it is the abstract brush flow resembling a stylised landscape that Gillani dealt with while a graduate student in London, or a patch of blood residue referring to extremism in her recent paintings (and the outcomes of her interest and “extended studies” in miniature painting) the solo exhibition at Canvas Gallery offered a rare opportunity to hear her distinct voice, clearly.

One gathers that the abstract mark-making is the main/ recurring motif in her work, whether from 1993-4 or recently. The observation brings us back to the sensitive relationship between the artist and the subject. Who comes first? What dominates? In Sabina Gillani’s case, one realises that these debates are superfluous, because when looking at the site of a bomb explosion, you are counting dead bodies and gathering scattered limbs. Maybe somewhere deep-down you are also preserving this scene as a model for future art making.

What lasts then is art, and not the sites of violence in Pakistan, Afghanistan, Iraq, Spain, Belgium or France, the country of Sabina Gillani’s current residence.

Warp and Weft I.

The taste of terror 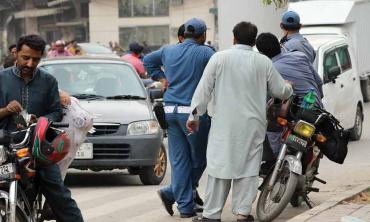 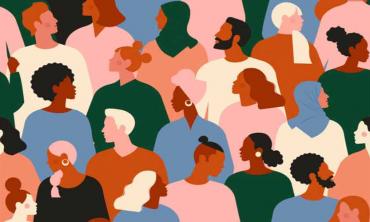 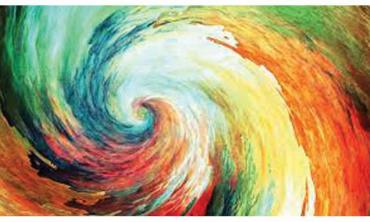