Kamiar Rokni opens a window to 20 years of his work, taking things back to the future.

“Twenty years go by in a flash and some of you have worn the clothes so you literally have evidence of the time,” an elated Kamiar Rokni spoke as he took a bow at the end of his show. “When you think about the people that have helped you, you think about the women; it’s always the women who make everything nice and beautiful and put all the joie de vivre in everything out there. It’s always the ladies, so thank you to all the women who have worn my clothes, who have taught me how to make clothes, who have taught me about elegance and style, individuality and dancing to the beat of your own drum.”

The percussion was quite cerebral that night. Hosting one of the most anticipated fashion shows in the past two years, precisely ever since Covid-19 had cast a spell on society’s style savants, Kamiar Rokni was in his element. He was celebrating 20 years of his work with a brand new collection that was also a retrospective of his creations through time. His signature hadn’t aged at all; leitmotifs from The House of Kamiar Rokni reappeared as beacons of his craft, waving a flag to the future. He called this The Optimist, completing a trilogy that began with his love for the exotic east in The Orientalist and continued with The Modernist, two of his most powerful past collections. Celebrating his ethos, The Optimist wasn’t closure rather a key that opened the lock to the future of fashion. That window also opened to Hope.

Things may look bad but never think of them as over.

The Optimist was a nod to indigenous techniques that defined the quintessence of The House of Kamiar Rokni. An accent of black and white rilli patchwork, a touch of gold basketweave, the shine and shimmer of moonshine and the fiery birds of paradise that embossed the canvas of several ensembles like a royal seal. Rokni’s canvas flashed an exciting interplay of fabrics and textures and his patterns paid homage to a new world order too. Connecting Persia to Southern Punjab via the Far East, his was a vision of global appreciation. The clothes belonged to the world and were constructed to be worn anywhere.

Barring the few classic bridals, the collection was a medley of styles that could be deconstructed as separates that celebrated our craft with a purpose of relevance. Jumpsuits with attitude, bralets and blousons that didn’t care for judgement calls. There were cascading sleeves that brushed off reason and skirts for every celebratory season. Jackets played an integral role in this collection that did give a nod to role play, some smoke and dagger and mystery in what is revealed and what concealed. The dupatta, whenever it made an appearance, was less function and more accessory to the crime. So much drama!

“I ask myself if it is art; can I call myself an artist? Do you think we are still in the ‘decorative’?
The role of art is to create beauty and to educate.”
– Kamiar Rokni

It was a dramatic evening indeed and the theatrics began with cocktails that – infused with dry ice – were smoky and fiery and lit up. With winter not quite in full force in Lahore yet, the evening fog flirted with the moonlight and Lahore’s most beautiful people watched the romance unfold. The smog got pushed back by misty fog and the smoky wafts in the air were reassuring dengue control measures. It may have appeared like people had thrown caution to the wind but there was some method to the ‘pandem-onium’. No one minded the two-hour delay, which – for a bad show – would have been intolerable. But when you have connoisseurs of art and literature such as Rashid Rana and Mohsin Hamid in the audience, the conversation flows freely.

An abundant grazing table and watering hole kept the high heeled and well versed refreshed as they waited. It had been almost two years since people had assembled under a fashion umbrella and they had lots to discuss. Sadia Siddiqui had just launched an exciting new clothing brand, ironically called NACS – Not a Clothing Store. Yasir Jaswal, also at the show, shared exciting bits about his involvement in the upcoming PFDC fashion week, scheduled for March. Mohsin Naveed Ranjha spoke about his Tan France moment and how he was planning to go international. Zain and Mustafa, two of the creative heads behind the super popular Rastah, talked about how a Pakistani fashion brand could be positioned in the world. Riz Ahmed wears Rastah; need one say more?

Seated next to Generation Creative Director Khadijah Rehman, one got to talk about fashion’s new role in creating a sustainable and responsible environ. Fashion was now also about inclusivity, which – coming back to the show – walked out in diverse and interesting forms. One remembered how, almost a decade ago at a Kamiar Rokni show, one had felt that Zara Peerzada – as spectacular as she was (and still is, by the way) – was too petite for the catwalk. It was a time when models had to be very tall and very slim. That mould applied no more. With fashion addressing all women, Zara looked perfect, as did Sabah Bano Malik, a firebrand who carried the torch for plus-size women. Fashion was no longer about size zero or one size fits all but about the right fit for everyone.

Not every outfit in the collection was as seamless though. Some of the colour-blocked satin dresses with the big bows and sheer gloves would be better off left back in the eighties. Most of the models looked great but it was evident that in two years without a runway show, many had forgotten how to walk. That said, the hiccups were a flash in the pan. There was an interesting pool of new models that will add value to the industry. And in the larger scheme of things, everything worked and moved to the music.

This is how couture needs to be celebrated. We’ve been speaking of customized couture shows for ages and how putting several shows, especially couture shows, on a single runway as run of the mill defies them. The Optimist brought out the optimist in us all, reminding one that despite a pandemic and the following economic crunch, fashion could come back to life as long as it was relevant. As Kamiar Rokni concluded in his little speech, “The role of art is to create beauty and to educate.” We just need to underscore the lessons that we’re learning along the way. 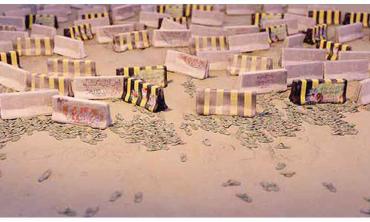