By the narrowest of margins

In the long history of Test cricket only 15 matches have been decided by just one wicket. Pakistan has figured in 4 of them, winning two and losing two.

Australia were touring Pakistan for a three Test series in the winter of 1994. The first Test was staged at the National Stadium, Karachi, where Pakistan had played 30 Tests without loss. Winning the toss, Australia batted first, but were soon in trouble at 95 for 4 by lunchtime. Michael Bevan, making his Test debut, and Steve Waugh then came together in an entertaining partnership for the fifth wicket, adding 144 runs between lunch and tea with a wonderful display of creative shot making. Bevan made 82 and supplemental fifties from Steve Waugh and Ian Healy took Australia to 325 for 7 by the end of the first day.Australia were all out the next morning for 337. Pakistan replied with a 90 run opening partnership between Saeed Anwar and Aamir Sohail, and at 153 for one wicket, seemed destined for a big score. However, Saeed Anwar’s dismissal for 85 from just 124 balls, containing 13 fours and a six, initiated a collapse. Nine wickets fell for 103 runs and Pakistan were all out for 256, conceding a first innings lead of 81.

Australia’s second innings began ignominiously with their captain Mark Taylor bagging a pair. However, David Boon and Mark Waugh rescued the side with a third wicket partnership of 122, that took Australia to 171 for 2, a lead of over 250 runs with eight wickets still intact. Wasim Akram and Waqar Younis now produced one of their memorable displays with the old ball, making it swing venemously and at pace, and dismissed Australia for 232 all out. The last eight wickets had fallen for merely 61 runs, with only Boon standing firm with an unbeaten 114. Wasim and Waqar had taken nine wickets in the innings between them.

Requiring 314 runs to win, Saeed Anwar and Aamir Sohail gave Pakistan another good start, with Saeed playing a sterling innings of 77, including 9 fours and a six. Batting steadily, Pakistan progressed to 155 for 3 by the end of the fourth day’s play.

Later that evening a scandal hit the headlines, as the Pakistan skipper Salim Malik was accused of offering bribes on the phone to Shane Warne and Mark Waugh to perform badly. To add more drama to the situation, the following morning Tim May and Glenn McGrath both reported unfit leaving Australia two bowlers short.

However, the wicket was now taking spin and Warne, bowling superbly, quickly snared three batsmen with his flippers to leave Pakistan tottering on 184 for 7. Inzamam was still at the crease and he now played one of the best innings of his career.

Taylor made the mistake of taking the new ball, thus relieving some pressure, enabling Inzamam to add 52 runs for the eighth wicket with an unwell Rashid Latif, followed by a 22 runs partnership with Waqar Younis. Pakistan still needed 56 runs for victory when the last batsman Mushtaq arrived at the crease, and initially Inzamam shielded him, but soon began rotating the strike when he noticed Mushtaq negotiating Warne with relative ease.

Finally, with the target down to just three, Warne decided to go round the wicket. He removed the midwicket fielder and tossed the ball up, tempting Inzamam to play a big cross-batted shot across the line of the delivery. Inzamam obliged by coming down the wicket but was beaten by the turn and missed the ball. Fortunately for him so did the keeper Healy, allowing the ball to go between his pads to the boundary. Pakistan had secured an improbable win, and Inzamam’s stand of 57 with Mushtaq, became the highest last wicket partnership to carry a side to a one wicket win.

Touring the Caribbean in the summer of 2000, Pakistan met West Indies in Antigua for the third Test. Sent in to bat, Pakistan made a disastrous start losing three wickets for 33. This followed similarly calamitous starts of 39 for 5 in the opening Test at Guyuna and 37 for 5 in the second Test at Barbados. They rallied through a stand of 97 between their two senior batsman, Inzamam and Yousuf. Inzamam made 55, while Yousuf scored his second century in successive Tests to remain unbeaten with 103 in Pakistan’s final total of 269. Walsh was the main wicket taker for the Windies with 5 for 83.

In reply the West Indies were happily placed at 214 for 3 when stumps were drawn on the second day, with the captain Jimmy Adams and Shivnarine Chanderpaul at the crease. They were not prepared for the blitzkierg that hit them on the third morning as Wasim produced a devastating 28 ball spell in which he took 6 wickets for just 4 runs to restrict West Indies to a first innings lead of only 4 runs.

Pakistan’s second innings was a copy of it’s first. Only Inzamam and Yousuf batted with any confidence in a third wicket stand of 80. Inzamam scored his second fifty of the match, before he was out for 68, to a disputed catch by the keeper, and Yousuf made 42. West Indies were left with a victory target of 216. After losing two early wickets for just 31 runs, they steadied their innings with a partnership of 53 between Wavell Hinds and Chanderpaul and then 60 between Hinds and Adams. Hinds with a polished knock of 63 was threatening to take the game away from Pakistan before he played a Wasim Akram bouncer onto his stumps in the last over of the fourth day.

At 144 for 4, West Indies needed 72 runs for victory on the last day. Pakistan’s strategy was to attack while for the West Indies Adams decided to farm the strike. A steady fall of wickets left the home side on 197 for 9 wickets, still 19 short of victory, when the last man Walsh came to the wicket.

Soon afterwards, Pakistan were confident that they had won when Jimmy Adams audibly nicked the ball to Pakistan’s skipper Moin Khan behind the stumps, but the umpire Billy Doctrove, standing in his first Test, turned down their appeal. There was, of course no DRS in those days.

With 16 runs still needed for victory, Walsh lunged forward to a Saqlain Mushtaq delivery that caught the inside edge of the bat before rebounding off the pad to Imran Nazir at forward short leg. The Pakistanis were jubilant, but to their complete surprise the umpire Doug Cowie ruled not out. TV replays clearly showed that the umpires had erred on both occasions. Three runs later there was yet more drama. Adams and Walsh both found themselves in the popping crease at the striker’s end after a botched call for a run. Younis Khan threw the ball to the bowler’s end where Saqlain, unbelievably, failed to gather the ball properly, with Adams still yards short of the crease. Eventually West Indies reached the required target and Pakistan lost a game that they should clearly have won. Wasim Akram bowled his heart out to get 11 wickets for 110 runs, the best figures by a Pakistani bowler on West Indian soil. Adams batted for over five and a half hours without hitting a single boundary, in a match winning innings of 48 not out.

When Bangladesh toured Pakistan for a three Test series in 2003, Pakistan triumphed in the first two Tests, before the two teams faced off in Multan for the final game. Pakistan had three Test debutants, Salman Butt, Farhan Adil and Yasir Ali. Interestingly, this was also Yasir’s first-class debut.

Bangladesh made 281 in their first innings, being largely indebted to the in-form Habib-ul-Bashar who scored his fourth fifty of the series. Pakistan batted poorly and were dismissed for just 175 runs, with Bangladesh’s left arm spinner Mohammad Rafique taking 5 wickets for 37 runs. Bangladesh fared even worse in their second outing, managing only 154 against spirited pace bowling by Umar Gul and Shabbir Ahmed who took four wickets each. During this innings Rashid Latif, the Pakistan captain and wicket-keeper, had successfully claimed a diving catch to dismiss Kapali off a rising ball from Yasir. TV replays revealed that the ball had popped out of Rashid’s gloves and had been gathered from the ground. Following an official Bangladesh protest, Rashid was banned for 5 ODIs and never played a Test for Pakistan again.

Pakistan needed 261 runs to win and began with a little cameo from Salman Butt, who scored 37 runs off 34 balls, with seven fours, in an opening stand of 45.

However, Bangladesh fought back well, reducing Pakistan to 148 for 6 by the end of the third day. Inzamam, with 53 not out, was the last recognized batsman left. Saqlain was dismissed in the fifth over on the final morning leaving Pakistan in dire straits at 164 for 7.

Shabbir joined Inzamam and the two added 41 invaluable runs for the eight wicket. However, Shabbir could have been out much earlier as Sarkar dropped an easy catch in the slips. The next batsman Umar Gul also had a lucky escape when going for a quick run. He was beaten by a direct throw to the wicket , but the bowler, Mohammad Rafique, had accidentally dislodged the bails when his foot touched the wicket before the ball hit the stumps. In the same over, Umar stepped out of his crease while backing up, but in a very sporting gesture Rafique stopped short of mankading him.

Inzamam, meanwhile, was playing the innings of a lifetime on his home ground, pouncing on every opportunity to score and at the same time shielding Umar from the strike, allowing him to face only one ball per over. When Umar was run out after a 52 run partnership Pakistan needed just 4 runs to win. Yasir, who had received an intense batting lesson from the coach Miandad, while awaiting his turn, now went in with almost a whole over to play. He managed to nudge the fourth ball he faced to fine leg and Inzamam wrapped up proceedings with a gorgeous four off his pads through mid-wicket. Pakistan had won by a solitary wicket and their hero was once again Inzamam.

Just a few weeks ago Pakistan and West Indies were again involved in a last wicket thriller. The venue was Kingston, Jamaica, in the opening match of a two Test series. Batting first Pakistan were uncomfortable against the West Indian bowling and managed only 217, which included knocks of 56 and 44 from Fawad Alam and Faheem Ashraf respectively. The West Indian reply of 253 was built around a solid 97 from their captain Braithwaite, who received commendable support from Holder’s brisk 58, which was studded with 12 fours. Barring a patient 55 from their captain Babar Azam, Pakistan again failed to apply themselves in their second outing, and were all out for only 203. Seales had figures of 5 for 55.

A victory target of 168 seemed like easy pickings but the Pakistani bowling attack responded admirably. In a fiery opening spell, Shaheen Afridi sent the first three West Indian batsmen back to the pavilion with just 16 runs on the board. A 68 run stand between Chase and Blackwood restored parity, but then two wickets each by Hasan Ali and Faheem Ashraf pegged the host team back to 114 for 7.

Pakistan definitely had the upper hand now, but the pressure got to them, resulting in three missed catches in a crucial final session. Rizwan dropped Roach and Abbas spilled a chance from Da Silva. Then, with the score at 149 for 8, Roach skied Shaheen Afridi towards the square leg boundary, where Hasan Ali ran a few yards to get under the ball, but then let it slip out of his hands. Two runs later Rizwan sprinted 45 yards to superbly catch Warrican and 17 runs were still needed by the last pair of Roach and Seales. Roach now took command and eventually an edge to the boundary past a diving Rizwan saw West Indies cross the winning line. For Pakistan it was a sad end to a pulsating finale where the initiative had swayed back and forth between the two sides and the match could have gone either way.

By the narrowest of margins 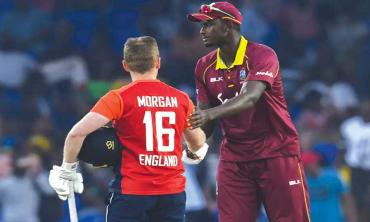 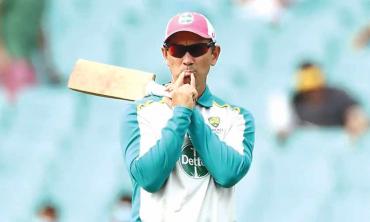 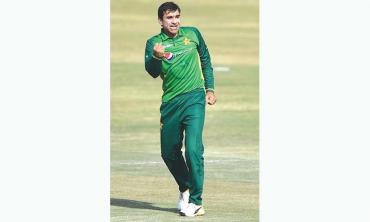