Pakistan has been extremely fortunate in producing some very talented all-round players who have demonstrated their range and repertoire across the entire changing spectrum of the modern game.

International cricket has gradually evolved into a three format structure, Test matches, One-day Internationals, and T20 Internationals. Each format requires a different skill set and all-rounders adept at all three are becoming an increasingly scarce commodity to find. There is, in fact, even a trend to field different teams for each format or ‘horses for courses’ as the old adage states. Pakistan has been extremely fortunate in producing some very talented all-round players who have demonstrated their range and repertoire across the entire changing spectrum of the modern game.Today we focus on the most successful all-rounders in international cricket to emerge from Pakistan over the past few decades. Most are exponents of all three international formats though some have experience limited largely to Tests and ODIs alone. As significantly more matches are played now, figures alone do not always allow a fair comparison to be made between players from different eras and the readers will be fully justified in choosing their own preferences from our list. We are setting the eligibility bar high and including only those all-rounders who have scored at least 5000 runs and taken over 200 wickets in international cricket.

There are six Pakistani players who have successfully scaled these heights.

Even this exclusive list shows a vast disparity in the number of matches played by different all-rounders, which naturally influences the total number of runs scored or wickets taken. Hence, these numbers alone cannot qualify as markers for gauging comparative success. We need to find better criteria for measuring excellence or value. A high batting average and a low bowling average are both universally accepted indices of good performance. Hence, the difference between the batting and bowling averages is being used here as a parameter for comparing quality. This is undoubtedly a relatively imprecise tool of assessment but is probably the best guide that is readily available for such comparative evaluation.

Other pertinent yardsticks of performance and impact, especially in the shorter version of the game, are batting strike rates and bowling economy rates. These rates, for ODI matches, are reproduced below.

Imran played before the advent of T20 internationals and his record is based on tests and ODI’s alone. Of his 7516 runs, 3807 were scored in Tests, averaging 37.69 per innings, and 3709 In ODIs at an average of 33.41. He took 362 Test wickets at 22.81 apiece and 182 in ODIs at 26.61 each. Basically he was an orthodox batsman who could free his arms to strike lusty aerial blows when needed. Usually batting in the lower middle order, he was often required to play a restrained hand in order to steady the team’s innings in difficult situations in both Tests and ODIs.

This is reflected in an ODI batting strike rate of 72.64 runs per 100 balls which is the lowest in the group. However, as a key strike bowler of great accuracy and pace, his ODI bowling economy rate at 3.89 runs per over is the best in this selected cohort, just edging out Wasim Akram. The difference between his batting and bowling average in all internationals is 11.36. This is vastly superior to other members of the group, who all have negative average differences, with batting averages trailing behind their bowling ones. This strongly positive figure reinforces the opinion shared by most pundits that Imran is the finest all-rounder that Pakistan has ever produced and perhaps one of the greatest in cricket’s long history.

In terms of the difference between batting and bowling averages Hafeez ranks second in this group with a negative difference of -1.35 between his averages. His run aggregate of 12,695 is the group’s highest and consists of 3652 Test runs at an average of 37.64, while in ODIs his tally is 6614 runs for an average of 32.90. A successful T20 career has brought him 2429 runs at 26.49 per innings. He has 53 Test wickets at 34.11 each and 139 in ODIs at 38.84 apiece. His 60 wickets in T20s have been obtained at a very economical cost of 22.26 per wicket. An ODI batting strike rate of 76.61 from 100 balls suggests a batsman cast in the traditional mould and an ODI bowling economy rate of 4.18 runs per over makes him a difficult bowler to score off. He also has a safe pair of hands with 159 catches in international games.

Hafeez’s versatility in limited overs cricket, has earned him recognition as the top all-rounder in the ICC Players Ranking list on many occasions. He has batted at all positions, from one to six, in the batting order and his off spin bowling has been similarly deployed in different roles too, including opening the bowling attack with it in many matches.

Razzaq occupies third position in the list with a negative batting and bowling average difference of -3.42. His 7370 runs owe 1946 to Test cricket with an average of 28.61 and the bulk to ODIs with 5031 at 29.94. He had a brief T20 career of 32 matches which brought him 393 runs, average 20.68. His wickets follow a similar pattern with 100 Test wickets at 36.94 each, 268 in ODIs at 31.83 per wicket and a small harvest of 20 wickets from T20s at a miserly cost of 19.75 apiece. Razzak was initially drafted into the national ODI team not only for his bowling ability but also to play the part of a pinch hitter. Throughout his career he retained the ability, in all formats of the game, to launch an explosive assault on the bowlers whenever required. His ODI batting strike rate is a healthy 81.65 off 100 balls while his ODI bowling economy rate of 4.67 runs per over is only marginally the most expensive in the group. Razzaq could bowl genuinely quick in the early part of his career, and though his pace dropped substantially with time, he lost none of his guile or ability to swing the ball. Normally posted in the outfield, he also has the lowest tally of catches in the group with just 52 from 339 matches.

Razzaq is followed by Shoaib Malik. First chosen for the national side primarily as an off spinner, over the years Shoaib has blossomed into a true all-rounder with batting now his stronger suit, albeit being more functional than glamorous in his style and stroke play. More than two decades of international cricket have brought him 11755 runs, which is the second highest tally in this short list of six. This includes 1898 Test runs at 35.14 per innings, 7534 ODI runs at an average of 34.55 and 2323 runs from T20’s, average 31.39. His 217 wickets are distributed between 32 in Test matches at an exceptionally expensive cost of 47.46 runs each, 158 in ODIs at 39.18 apiece and 27 in T20s costing 23.25 runs per wicket. The difference between Shoaib’s batting and bowling averages is negative at -4.45. His ODI batting strike rate is 81.90 runs per 100 balls and he has an ODI bowling economy rate of 4.66 runs per over, both fairly similar to those of Abdul Razzaq. An agile and reliable fielder Shoaib has 166 catches to his credit, just one less than Shahid Afridi’s tally of 167.

A naturally gifted all-rounder, Wasim’s batting skills were overshadowed by his outstanding bowling performances. As the mainstay of the Pakistan pace attack for the greater part of a career spanning almost twenty years, he batted low down in the order and his batting consequently suffered from neglect. However, there were occasional flashes of brilliance as a batsman, none more evident than in his first Test hundred against Australia at Adelaide in 1990 and in a magnificent unbeaten 257 versus Zimbabwe in 1996, that contained 22 fours and 12 sixes. His 6615 runs included 2898 in Test cricket at an average of 22.64 and 3717 in ODIs at 16.52 per innings. His bowling was, of course, superlative and netted him a total of 916 international wickets, 414 in Tests at an average of 22.62 each and 502 in ODIs at a cost of 23.52 apiece. The difference between his batting and bowling averages was negative at -4.63, largely because of his casual approach to batting, especially in ODIs, when he would usually come in during the dying overs of his team’s innings for a brief slog. A powerful hitter of the ball, his ODI batting strike rate is high at 88.29 runs in 100 balls, next only to Shahid Afridi in this list, while his ODI bowling economy rate of 3.90 runs per over, almost matches Imran’s. Wasim, like his mentor Imran, played in the era prior to T20 Internationals.

The final name in the list is that of Shahid Afridi. Initially inducted into the Pakistan side on a tour of Kenya, as a leg spinner to replace an injured Mushtaq Ahmed, the captain, Wasim Akram, noted during net practice that Afridi had good batting ability as well and was a clean and powerful striker of the ball. Wasim had to leave early to attend to a family emergency, but asked his stand-in Saeed Anwar to give Afridi a chance with the bat. What followed is history. Playing against Sri Lanka, in only his second ODI, Afridi was asked by Saeed Anwar to come in at the fall of the first wicket. It was Afridi’s first innings as a batsman for Pakistan and he re-wrote the record books with an unbelievable innings of rare savagery. His fifty came off just 17 deliveries and a hundred from merely 37 balls containing 6 fours and 11 sixes. Overnight he became a star and his batting became an instant crowd puller. He has scored 11148 international runs, 1716 in Test cricket averaging 36.51, 8064 in ODIs at 23.57 per innings and 1416 in T20’s at a surprisingly low average of 17.92. He also owns the world record for the most sixes in international cricket with a tally of 476, justifying his epithet of ‘Boom Boom.’

While it’s his brutal batting skills that have claimed centre stage, Afridi is also an accomplished leg spinner with 538 international scalps. His tally includes 48 Test wickets at 35.60 runs each, 393 ODI wickets at 34.54 runs per wicket and 97 wickets in T20s taken at 24.35 runs apiece. The difference between his batting and bowling averages is a negative -8.66. His phenomenal batting strike rate of 116.94 is significantly higher than that of his contemporaries and a bowling economy rate of 4.62 runs an over is an acceptable figure for an attacking leg spinner. As a keen fielder he also heads this particular category with 167 catches. Unorthodox but extravagantly gifted Afridi completes this list of Pakistan’s most successful all-rounders, those who have achieved the rare distinction of scoring over 5000 runs and claiming over 200 wickets in international matches. 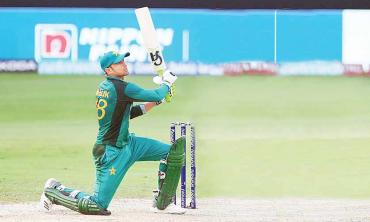 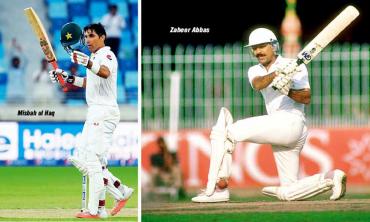 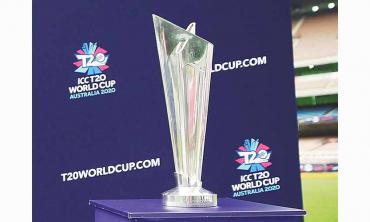