Mohammed Rafi was born in Kotla Sultan Singh village in the Punjab. He then moved to Lahore and spent the formative period of his life in the city working as a barber in a family enterprise round Mohni Road and Bhati Darwaza.

But what was Lahore like in those days, especially if one recalled the cultural features of the city? It was primarily the princely states that were responsible for preserving and promoting the classical and traditional arts as the British rulers were not too enamoured with the artistic forms that were valued and prized in the local ethos. They introduced changes in poetry in the city through its Directorate of Public Instruction. Art colleges under the government were set up in the cities, including Lahore, where the entire craft of making visual representations was questioned and rewritten. There was no formal music or theatre institution under the government. However, Mahavidyala had at least one branch in the city where, under the influence of Vishnu Dagambur Palushkar, music was being taught more in the classroom pedagogical framework than the guru-shisya parapara or the ustad-shagird paradigm.

Gramophone companies had set up their offices and studios in the city as indeed in the other cities of the sub-continent like Bombay, Calcutta and Madras. This necessitated a change in the form of music dictated also by the limitations of technology. Then came films and Lahore became one of the four film making centres, the other being Bombay, Calcutta and Madras. When the radio was being established, one of the first stations to be set up was in Lahore in the 1930s. Classical music was broadcast on the radio, but then radio, with is technological compulsions, changed classical music yet again.

It is said that the real centres or focal points of music were the various shrines where melas and urs celebrations were held regularly. At the same time, there were the baithaks of the influential people, who hosted mehfils of music in their houses on a regular basis. Then there were various takias where specialised cultural activity took place. In Takiya Mirasiyan, only the virtuoso dared to perform as the way a performance was received there could make or break a career.

It should not be forgotten that Lahore was a city inhabited by Hindus and Sikhs as much as by the Muslims. The cultural mix made it a very important centre of the arts. It was said then, and is still said, that a gawaiya or a wajwaiya only qualified to be a performer once it was informally recognised by the audiences of Lahore. The city had become the benchmark for what determined the aesthetic taste.

The class pattern, too, was changing at that time and a new set of those educated in colleges and universities emerged who were, so to say, alienated from their native culture or looked at it from a distance. The loss of power in the subcontinent had instilled a fear that it may have been due to excesses, perhaps, embedded in cultural practices round sangeet, rehas, nach and sukhan. As a reaction, a more staid value structure was favoured. Perhaps, it was also aided by the Victorian ethos that had left its mark on education and cultural practices of the new educated groups.

Mohammed Rafi’s heart lay in music and he moved. He mixed freely in the music circles picking up the intricacies of music from a number of well-known vocalists and instrumentalists of Lahore. The music scene was quite vibrant and people like Jeevan Lal Mattoo served as connoisseurs and patrons of music in the city. It was in these baithaks and soirees that Mohammed Rafi picked up the finer aspects of the art from ustads like Abdul Waheed Khan and Chhotay Ghulam Ali Khan. Feroze Nizami introduced him to the radio in Lahore before he had made his film debut for Shayam Sunder’s Punjabi film Gul Baloch in 1944.

The popular culture had emerged with a patronage that was propped up by a diversity of groups: the old feudal elite, the emerging and powerful mercantile elite and the educated groups serving the government in various capacities. Then there was the silent mass of humanity that was ripe to receive at the popular level another kind of music that was being promoted by film songs. While kheyal and before that dhrupad had been great examples of khula gana, as indeed qawwali, the lok forms tied the bandish to the character and the situation. The cutting of the seventy-eight rpms probably also set the time limitation of the number and this was followed into the film format as the playback was introduced in the early 1940s. The vocalists, instrumentalists and composers had to acquire the skill to do so much in that duration. The format was thus laid down as a bit of alaap thrown in first one followed by an asthai and two antaras with and a couple of interval pieces inserted.

Mohammed Rafi moved to Bombay and was given a break by Naushad in the film Pehlay Aap, the same year. Though he was noticed in Anmol Garhi and sang alongside KL Saigal in Shah Jehan, both under the music direction of Naushad, it was his duet with Noor Jehan in Jugnu, composed by Feroze Nizami, that made him a serious contender to fill the vacant slot of the leading male vocalist. He truly arrived as an individual vocalist in Dulari and Mela, where again he sang under the musical direction of Naushad to an all-India audience. 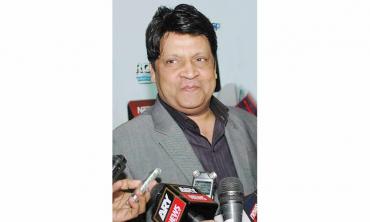 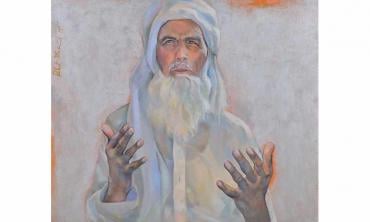 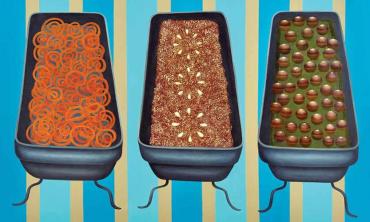