Mubarak Ali Khan, who died last week, had been singing for more than five decades. He had trained a number of genres but for the past three decades or so had concentrated on the kheyal. A hereditary musician, he was not a kheyal singer to begin with. It was on account of idolising Ustad Amir Khan that he moulded himself in his style.

His was a difficult journey because he stuck to the traditional style. Till the very end, he did not cower under pressure to compromise in favour of more poplar forms. This determination was all the more significant because he had started his career a qawwal. During the past five decades, qawwali became both a musical patent internationally and a concert item at home. Its relationship with the shrine mutated many a time and in the end detached itself from its usual quasi-religious moorings.

During this time, one saw many a qawwal veer towards a more contemporary sonic representation with help from computer generated sound, emphasising the rhythmic pattern. This, made qawwals sound more like rock stars. This was considered to be yet another legacy of Nusrat Fateh Ali Khan. However, Mubarak Ali quit qawwali and settled for a more meditative tone that dwelled in a introspection through the unhurried unfolding of the raga in the vilampat lai. Other than evoking an ecstatic response, the stress was on an incremental build up that nuanced into evoking different layers of shrutis embedded in a sur.

In the course of the Eighteenth and Nineteen Centuries, many of the qawwals switched to singing the kheyal as it was considered more prestigious. Two outstanding examples of this were Ustads Barray Muhammed Khan and Tanrus Khan. The former is considered the first genuine exponent to establish the kheyal as an independent form after the musical taste had shifted away from the dhrupad. The latter is seen as one of the leading exponents whose innovations and talent announced in no uncertain terms that the genre had arrived as a major form of serious music.

Mubarak Ali Khan took to the kheyal at a time when it had dwindling takers in Pakistan. That must have been because he was sincere to whatever he was doing irrespective of the response that he was able to get. He made his task even more arduous when he decided to emulate Ustad Amir Khan. In a certain way, he went against the drift of music in Pakistan because here the emphasis unfortunately had shifted to virtuosity, which meant excessive reliance on fast flights, preferably lightning fast, and then the intricate division of the rhythmic cyclic.

A musical performance only warms up once the vocalists indulges in lightning fast taans and tehais –preferably with one following the other. The gaana in the vilampat lai, which emphasises lagao, has suffered. The musicality and the melodic content thus escaped kheyal and found refuge in the other forms, like folk and ghazal. Meanwhile, classical forms were seen as the battleground for virtuosity –rather externalised virtuosity. Mubarak Ali Khan, however, stuck to his style. He brought to life the exploration of the raga in slow tempo.

The Ustad Amir Khan-Mubarak Ali were a rare case of a bond between an old ustad and a young admirer - it was a bond that was not ustad/shagirdi in flesh and blood but on a roohani level. No expression in another language fully captures the essence and the implications of the term. One can translate roohani as spiritual but the connotation is much more cultural-specific than that associated with the merely spiritual. Mubarak Ali Khan had been so impressed by the singing of Amir Khan that he accepted him as his roohani ustad.

They never met and there was no one-on-one interaction between the two. It has little to do with the traditional teaching relationship where the ustad in person teaches the shagird the finer art of music. However, in a higher sense, it was a bond that had all the trappings of a formal personal relationship. More was added to it by the absence of the ustad.

Ustad Amir Khan was himself greatly inspired by the singing of Ustad Waheed Khan of the Kirana Gharana. If one hears the vocal rendering of Ustad Abdul Karim Khan and Abdul Waheed Khan, the two outstanding exponents of the Gharana in the first three decades of the Twentieth Century, one can only vouch for the diversity that existed in the Gharana. Abdul Waheed Khan was very particular about the intonation and the correct nuance of the note in according with the raga as he specialised in vilampit lai gradually weaving the magic of the notes in the slow elaboration of the raga in a tempo, where the nuance of the note is not lost in acceleration but retains its emotional colouration by dwelling on it.

It frequently happened that as the raga progressed at a certain pace, Ustad Mubarak Ali Khan suddenly decided to wrap it up on account of the time constraint. He rarely had the luxury of a gradual unfolding as organisers of the programmes pressed for fixed schedules. 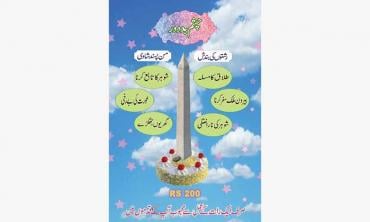