Art and its audience

The work of art is a means to communicate with others: of same period or region, or belonging to a distant land or a different time (future)

Everyone is familiar with the small figurine of the Dancing Girl from Mohenjo-Daro, but no one knows about the audience she was performing for. Presence of people, not only at a religious ritual, but in any other public exchange is essential, especially for art, because the language exists between the private and the public. The work of art is a means to communicate with others: of same period or region, or belonging to a distant land or a different time (future).

Even though the script of Indus Valley Civilisation has still not been deciphered, some believe that the Dancing Girl was called Sambara. One could argue or refute this assumption, yet the name is important for another context, and purpose – to provide identity. The Culture Department of Sindh Government, recently established an art gallery at the premises of Liaquat Memorial Library, Karachi, and baptised it Sambara Art Gallery. It also organised Art Fest Karachi, curated by Waheeda Baloch, from March 24 to 28.

Sambara was reminded on many occasions and for various reasons in the gallery filled with paintings, sculptures, installations, drawings, miniatures, video projections and mixed media pieces. The exhibition was accompanied by three panel discussions on certain aspects of art, much attended affairs, in which while the speakers were known personalities, the audience, unexpectedly, differed from the usual crowd of withdrawn, reluctant and bored onlookers you come across in art exhibitions, literary festivals, lectures, and seminars. The fact that most participants preferred to talk in Urdu instead of English, the lingua franca of art, was meaningful in every sense of the word. Talking on contemporary art in Urdu compelled speakers to forsake jargon and stock phrases, and look for honesty in their conversation, whether on the Life and Works of Meher Afroz, Performance Art, or the Evolution of Artistic Thought and Practice.

The spirit of inquiry experienced at the panel discussions, was evident in the display of Art Fest Karachi, and in its appreciation by students, art enthusiasts, and general public, who not only came from many neighbourhoods of Karachi, but also from far off places in Sindh to attend talks as and to see the show. Karachi thus looked like a part of Sindh it is - a fact that is rarely acknowledged. This was mainly because most of the art came from the interior Sindh, contributed particularly by the teachers, graduates and students of the University of Sindh-Jamshoro.

However, the local identity of artists was an extraneous, if not a superfluous detail, because the works on the wall never revealed an ethnicity: hardly a vernacular attraction, an indigenous character or a touristic setting. These works represented concerns, repeatedly witnessed in the modern and contemporary art.

Waheeda Baloch, the curator of the Art Fest Karachi, tried to segregate exhibits according to subjects, imagery and medium, such as gender issues, figurative images, video-installation/projection. Some well-known artists were specially invited for this exhibition and a large number of emerging artists submitted their creations.

In both categories, there were surprises. For example, a section of the show was devoted to Meher Afroz. Recognising and paying homage to a unique individual, who has produced works of an exquisite nature in diverse mediums, techniques and scale. Artworks from various phases of her career conveyed the range of her practice as well as overlapping themes and overarching sensibility. There was an etching print comprising a torso and masks floating in white space. Her sensitive rendering of human and plants evoked emotional responses from the viewer, as was the case with her mixed media series Aab Nayab, 2019. In these, the artist constructed subtle textures, primarily in shades of singular colours (yellows, reds, blues, browns). Most of her pieces looked like a cross between pages of ancient manuscripts and sheets of old fabrics. Mehr Afroz has employed stitching, collages, and layers of materials to assemble dense and rich surfaces, which do not narrate a scene, but stir the inner state of a human being. Hence the paintings function as mirrors.

Baudelaire writes “caricatures are often the most faithful mirror of life”, but so is art; thus, a mirror-like quality was blended into cultural memory by Meher Afroz. Her aesthetics is drawn from craft, language and religious symbols. Rug-like tapestry (with cushions) raised from the floor, or large dark fabric with small knives and swords woven as if the script of a cryptic vocabulary extended her practice from the conventional paintings and prints to artworks that speak a mystic and poetic language.

The mega art event included works by other artists recognised for their distinct styles: Amjad Ali Talpur presented a portrait of Shaheed Benazir Bhutto rendered in miniature painting, comprising 23 small blocks, which, echoing a game, could be shifted with numerous possibilities, to adjust the iconic face in diverse compositions and varying features. A comment, probably, on how the personality of a national hero is modified for temporary needs/gains. Nizam Dhari, with a similar approach but using a different image, split/stretched a still life of Paul Cezanne. Two versions, both in separate colours were layered on top of each other, resembling a printing mistake. His work also challenged our habit of viewing the world in precise and prescribed hues. The divided vision was further experienced in the work of Mudassar Rashidi, in which part of a train station was painted next to the video of an identical spot.

A number of other artists attempted to highlight social issues using popular imagery and handy props. For instance, Manizhe Ali’s installation I Speak, You Hear Me, Together We Are pointed “to the power structures”, signifying individuals reduced to blind and mute in terms of their conditioning. Plastic dolls balanced around a circle of decayed rose petals, and along with mesh screen, fairy lights and audio added into the atmosphere of this ‘familiar’ but unbearable macabre. Concerns from societal to global were visible in another work, by Jumana Tayyebi. The painter, taking inspiration from the Italian artist Alighiero Boetti’s Mappa, created a map of the world in respective country flags, but changed existing geography by inserting her self-portrait composed of national flags in the centre of the planet; alluding to the position of a female in the world (order).

Several other artists explored imagery and materials to express ideas beyond art. A remarkable installation, Shajra-e-Nasab by Saliha Naz responded to the notion of family tree, by installing trees composed of fibre in the venue’s lawn. The work had several connotations. The essence of a family tree is conserving a clan/tribe’s history, but most memory trees are limited to male names. Saliha Naz erected her Shajra-e-Nasab in a material often associated with and identified by women. Thus securing a place for herself in the hierarchy of a male dominated society.

Art Fest Karachi was also an endeavour to claim a rightful space for individuals, artists as well as visitors, who have been treated like outsiders to the mainstream discourse of art. It woke up artists to the reality of a land that lies beneath their feet.

Art and its audience 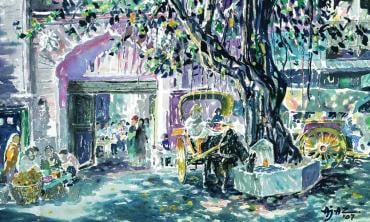 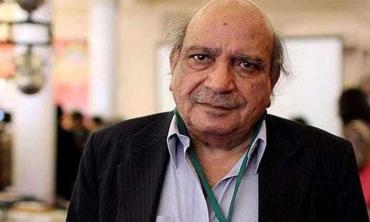 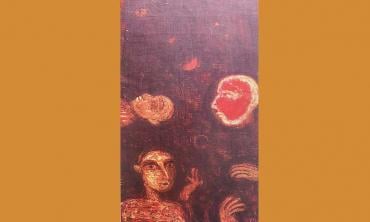 In praise of a page