Thanks to one of my PhD students doing research on Cholistan forts, we made several trips to the great desert and visited dozens of forts during the course of their research. On one such trip, we ended up visiting Rahim Yar Khan, and even though the Harrand fort was not a part of our study, we decided to visit it as well.

It was almost dark when we left Rahim Yar Khan for Rojhan. At nearly midnight, we crossed the River Indus by boat bridge. We were told when we started this journey that the passage to Rojhan and Rajanpur was not safe, particularly at night. We were thus provided armed guards who piloted us in their jeep. Around midnight we passed by the town of Rojhan and started our journey on the National Highway towards Rajanpur. A few kilometers before Rajanpur our guards said goodbye to us and about half an hour after midnight we were in Rajanpur. Historias maintain that the word ‘Rojhan’ has its origins in the ancient Babylonian language, meaning ‘city of tents’. Present-day Rojhan is situated near Indus River bordering Dera Bugti, Balochistan and Kashmore, Sindh.

Rajanpur was founded by Makhdoom Sheikh Rajan Shah in 1731-33. It remained a small and little known village, located off the Dera Ghazi Khan-Sukkur road, until 1862. That year, Mithankot, a larger and more prosperous town, located on the bank of River Indus, several miles south-east of Rajanpur, was destroyed by river floods. In a preemptive move, the administrative officers of the British government had moved all their offices from Mithankot to Rajanpur as it was at a safe distance from the river. The prosperous Hindu business community also moved from Mithankot to Rajanpur.

Our journey by road from Ranjanpur to Harrand was tedious and cumbersome. The road was in patches and narrower than the width of our vehicle. At some places, it did not exist at all. At others, it had been truncated on both sides and the cuts were deeper than half the width of the road. In short, travelling on this road was quite an ordeal.

From Rajanpur, we reached another village called Hajipur, situated at a distance of 27 kilometres (km) from Rajanpur. Next at a distance of seven kilometres was Mirpur, another small village. Driving another 24 kilometres, we reached Lalgarh and after a journey of 26 kilometres, Luddi-Sayyidan. Finally, after travelling for another seven kilometres we were close to the Harrand Fort in the area called Pachaddh. There is another route that connects Rajanpur to Luddi-Sayyidan. The distance is about 52 kilometres but the pavement is in shambles and not motorable. Hidden behind the growth of wild flora, the Fort has the mighty Sulaiman Range on one side and the mighty River Indus on the other. During the rainy season, this area is often hit by terrible storm-water waves. Even though it is in a bad shape, the Fort has withstood the ravages of time and recurring floods. It was originally built opposite the historic Chachar Pass in the Sulaiman Range to guard against the invaders.

According to a chronicle, Sikh governor Sawan Mal used the material taken from the old fort to rebuild the Fort on the new location in 1831. The present structure of the fort – a valuable part of our heritage is situated about 25 kilometres west of the sleepy town of Dajal in Rajanpur district. History has it that Harrand Fort was originally built by Hindu Raja Harnakish in the name of his son Hari Nand.” According to some accounts, Harrand could be a corrupted form of ‘Hari Nand’.

There is another interesting story about this Fort popular amongst historians. The legend goes that when young Alexander the Great, on his way home after conquering most of the known world, entered this area, Harrand was under the rule of a Hindu King who had a beautiful daughter, Nowshaba. She was talented, daring and fond of hunting. Besides, she efficiently managed her father’s state. Alexander heard about the princess and wanted to see her. He approached the Fort in the guise of a ‘messenger from Alexander’ and was taken to the court of Hindu Raja where he saw Princess Nowshaba. She ordered for him to be immediately taken to the royal guesthouse. At the guesthouse when he introduced himself as a Alexander’s messenger, the princess smiled and pointed to a wall where portraits of contemporary kings including Alexander were hanging. Iranian poet Nizami has narrated this anecdote in Sikndarnama adding that the two eventually got married. The veracity of the account has not been established by historical evidence.

The third historical phase of this Fort is associated with the arrival of Muhammad bin Qasim in the subcontinent in the early eighth century. This seems conjectural. I do not believe that Muhammad bin Qasim ever reached Harrand during his short stay in the subcontinent. Some historians also believe that several invaders, from Changez Khan to Muhammad Ghauri visited this place.

There are several historic passes in Sulaiman Range to the west of this Fort. These include the Sakhi Baranjis Pass, the Bugti Pass, the Qahir Sultan Pass, the Chachar Pass and the Bigari Pass. The fort was built opposite the historic Chachar Pass to guard against the invaders. After 1831, te Fort garrisoned the Sikh army to control the Baloch tribes. The famous battle between British troops and Marri Bugti tribes was fought here in 1867. After annexation of this part, the British used the Fort as a cantonment.

The Harrand Fort is built on a hexa-decagonal (sixteen sided) plan which is a unique feature. It is spread over an area of 50 acres. The outer wall, which is in a decrepit state, is over a kilometer long. At each corner, there is a strong bastion in the form of a buttress having sixteen sides. Each side, totally flat, inclines inward as it ascends. This is an elegant scheme of construction. It is interesting to note that at the outer periphery of the rampart there are no walkways. Perhaps those have been destroyed for lack of conservation. Similarly, the kiosks atop the corner buttresses have not survived. Though the main entrance is in the east there was an entrance on the western side as well. The counterscarp or faseel of the fort was built using small bricks commonly used by the Mughals but there are insertions and underpinning that have the bricks introduced by the British.

On the eastern side, the fort is approached by a massive ramp which takes one to the level of the main gate. Inside the gateway, there are rooms on both sides. Right in front of the gate is a huge empty court having British-style barracks on the flanks. Across the open court is a stable-type structure in ruin. Beyond this stable, the whole area of the fort is empty but for scattered old brick debris.

Just outside the gatehouse, there is an interesting structure on the left, absolutely round with a dome made of bricks. We were told that this was a temple. Close by there is another nearly demolished building whose semi-circular arches are still standing. The upper parts of the fort, unfortunately, have not withstood the ravages of time and vandalism.

The once mighty Harrand Fort now gives a desolate account of how we have failed to protect our precious heritage.

The writer is an internationally recognised authority on Islamic Architecture. He draws political cartoons also under the nom de plume of Maxim which is a household name in Pakistan 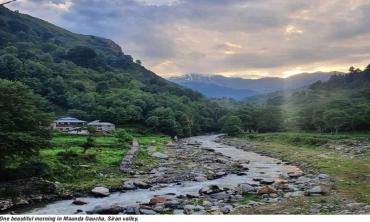 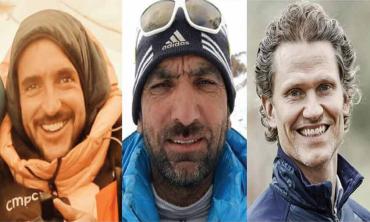 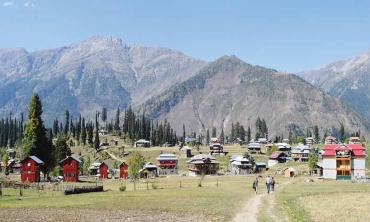