You can argue the point, and doubtless will, but I can’t think of a wicketkeeper-batsman who maintains such standards while switching from one format to another. Jos Buttler and Wriddhiman Saha are potential contenders but de Kock has the title. Come to think of it, a single team can be chosen that would perform brilliantly well in all formats - the surest illustration of a game and its players that is moving into a new age. Increasingly, cricket allows for innovation - demands it, even - and the impact on the players has been to unlock their imagination.

In the early 1970s the Dutch football team, inspired by Johann Cruyff, was credited with “total football”, a phrase loosely meaning that the 11 players could interchange roles without any obvious effect on their performance. This wasn’t quite true but it gave the magic a little extra myth. Holland lost the 1974 World Cup final to a pragmatic West Germany; of course they did: art undone by architecture

Sir Matt Busby is supposed to have said that George Best was not just the best player at Manchester United but the best player in every position - “but don’t tell Alex Stepney,” added Sir Matt. Stepney was the goalkeeper.

Often it seemed that Cruyff and Best hypnotised their opponents, so flat-footed were the responses to their control and use of the ball. Neither saw this high level of skill as an excuse to not do the hard yards; both earned general respect for their all-round contribution to matches played in conditions good and bad. They were glamorous too, and typically surrounded by acolytes and parasites. Best was rather “looser” than Cruyff when it came to lifestyle, but in both cases the admission money was cheap at the price. It wasn’t just the dribbling - it was the dash and the derring-do.

Cricket’s litmus test is the three formats and de Kock passes that test. Let’s deal with the keeping first. He catches the ball, which is a good place to start. It’s not an exemplary technique but with the keenest eye and a ball player’s natural hands, he gets the job done. Sometimes he flies like a bird to pluck the ball out of Johannesburg’s thin air, other times he stands on his regular spot, all understated humility, to gather it in like a clergyman accepting Sunday morning’s collection. Up to the stumps, he uses instinct above all else, waiting late to strike early. If the feet go, so too does his head and all is well; if they remain stuck, it’s those hands again, like lightning, to save the day. You wouldn’t swap him for anyone because of the possibilities. MS Dhoni was similar: an unorthodox in the clothes of the conventional.

Amazing really, both of them. Quite similar in their way. Richie Benaud thought Gilchrist the cleanest striker of a cricket ball he had seen, just pipping one Garfield St Aubrun Sobers to that place in the pop charts. Is it an advantage to keep wicket and open the batting, at least on the occasions when that is the sequence? Probably this is because the eyes have done their adjusting. But these occasions only apply for approximately half the number of matches they play. The rest of the time they are in the pack. Fact is, very few wicketkeeper-batsmen swing the bat with fear; it is as if the hard part is with the gauntlets on and the rest is easy.

Perhaps the best thing we can say about them both is that, like Cruyff and Best, you make sure you are in your seat when they walk on out there. At the recent IPL, de Kock was quite likely to hit the first ball into the stands. This was never a slog, more a brushstroke with vigour. His cutting of the ball is killer, his shots over wide long-on as powerful as those of the big men, and he is only a slip of a thing but wiry-strong and blessed with timing. Only when he went rogue - ramping and scooping - did he miss. When he kept it straightforward, the sound of ball on bat was very Gilchrist. He’s a thrill a minute is the South Africa captain, with a hint of genius thrown in.

To the captaincy we come: the job in which when you win, you’re supposed to, and when you lose, it’s your fault. Captaincy is a hard-knock life, unless you’re Clive Lloyd with that attack or Steve Waugh with the other. Will de Kock rise with the responsibility or shrink with the burden? He needs his young players to grow up fast and his support staff to take care of the myriad off-field distractions that plague captains. He is not a waster of words but neither will he mince those words when needs must. Strong tactically, trusted and liked, his time has come in short-form cricket, and if it is his wish, will come soon enough in Test match cricket too. The trick for the selectors is to not paralyse him with promotions.

This short series against England brings to end South Africa’s longest period without international cricket since returning from isolation in 1992. There will be rust in the joints and blips in the minds of all except those who were at the IPL. Now, of course, isolation has a new meaning and the coaches will be aware of the need to keep tabs on their number. The bubble is easier for some than others.

The pitches at Newlands and in Paarl are likely to be slow, and the skill sets required to take a game by the scruff of the neck all the more demanding because of it. The South African IPL stock - de Kock, Rabada, Anrich Nortje, Faf du Plessis, David Miller, and Lungi Ngidi - have all had plenty of time with bat and ball. Their names are a reminder that England will not have it all their own way, so too will the scoreline last February, when some nerve-shredding matches had folk jostling for position in front of TV screens.

It is clichéd to say that these matches mean a great deal to South African cricket. Chaos reigns within the corridors of power but attention is turning to those who play instead of those who administer, which is a boost for morale in itself. England’s willingness to return so soon after the last visit reflects a world that is joining up the dots. From the tour, South Africa will make something in the region of 70 million rand (approximately US$4.6m), crucial money at a troubled time. This will kick-start the television-rights pathway, allowing CSA to sell its wares far and wide.

One thing we know, they all want to watch de Kock bat, and Stokes. They all want to watch Rabada bowl, and Archer. This is a golden age for sport on television simply because there is nowhere else for it to be. An empty ground promises little but realises a great deal. The IPL was proof of that, so too England’s summer series against West Indies and Pakistan. That the game has come together in this way is a thing of beauty in itself. Come Friday evening, 6pm South Africa time, don’t miss the moment when Archer sprints in to de Kock. It’s the knuckle of sport.

Oh, and as for that team... in T20 batting order (to be tinkered with for a Test match by swapping de Kock and Williamson): Warner, de Kock, Babar Azam, Stokes, Williamson, Buttler, R Ashwin, Rashid Khan, Archer, Rabada, Bumrah, with Kohli the floater, stirred up and busting to stamp his authority on everyone and everything. And Boult (or Starc) in the party of 13. You could travel the world with that lot and not go far wrong.

Mind you, it is a list without Rohit Sharma - such a talent! - and one that sorely misses AB de Villiers, whose retirement from Tests and ODIs still breaks the heart. In him is a bit of both Best and Cruyff, and of course, a signpost to “total cricket”. These may be far from the days of our lives but from sport comes a sense of optimism and the chance to marvel at performances that continue to evolve and entertain. We can be thankful for that, even without de Villiers at Newlands on Friday evening. –Cricinfo 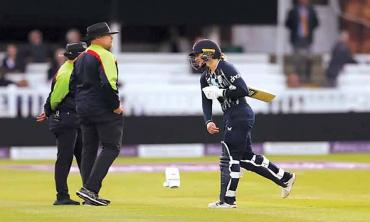 Why is there stigma involved in running out a non-striker? Because it’s all about power 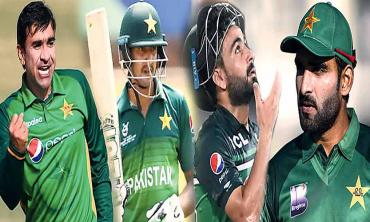 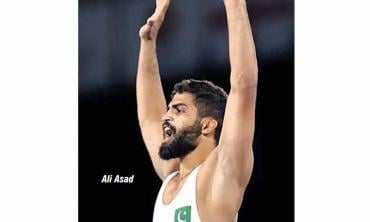